Your Genes Could Influence How Much Mosquitoes Love You 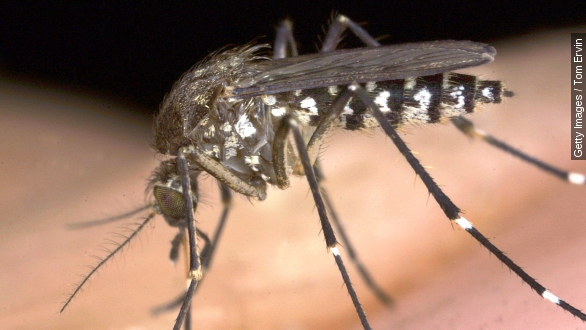 SMS
Your Genes Could Influence How Much Mosquitoes Love You

There might be a reason mosquitoes bug you every summer. According to new research, your genetic makeup influences how much mosquitos are attracted to you.

A study at the London School of Hygiene & Tropical Medicine tested 37 sets of twins, some fraternal, some identical. Each set of twins stuck a hand in a tube full of mosquitoes — for science.

The idea was to give the mosquitoes a choice. The insects had 30 seconds to smell each hand; then, they were let loose to fly toward the more appetizing twin. (Video via National Geographic)

"Identical twins are very similar in terms of how attractive they are to mosquitoes, compared to unidentical twins," study author James Logan said.

The researchers determined DNA influences between 62 and 83 percent of someone's "mosquito attractiveness." (Video via the London School of Hygiene and Tropical Medicine)

The researchers say it might be possible to develop a pharmaceutical mosquito repellent, but they'll have to determine exactly what in our DNA causes the attraction.

Smell is a common factor: Earlier studies have investigated how mosquitoes can hone in on human skin odors and how the malaria parasite modifies mosquitoes' own sense of smell to make humans smell more attractive.

And there's good reason to investigate further. By some metrics, mosquitoes are the deadliest animals on the planet. (Video via Gates Notes)

According to data from the World Health Organization, mosquito-borne malaria, dengue fever and yellow fever cause millions of deaths worldwide every year.