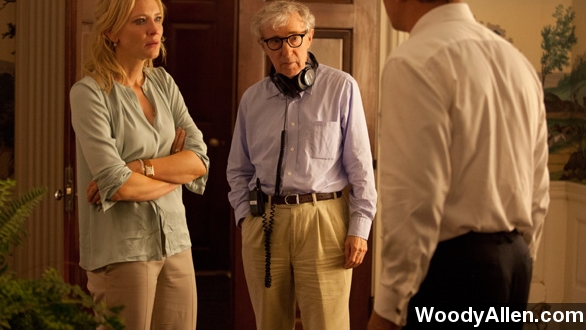 By Jasmine Bailey
February 8, 2014
The filmmaker, recently accused by his daughter of sexually molesting her, says the claims are false and a product of his ex-wife, Mia Farrow.
SHOW TRANSCRIPT

In a New York Times op-ed of his own Friday, famed director Wood Allen publicly responded to his daughter Dylan Farrow's claims that he molested her.

"He says that it's his ex-wife that's to blame... Dylan Farrow first made the allegations after his divorce in 1992 and police never charged him. Allen also says his daughter was a vulnerable child taught by her mother to hate him."  (Via WFMY)

He also says Mia Farrow was vengeful after finding out about Allen's relationship with her adopted daughter, Soon-Yi, which began while he and Farrow were still in a relationship. (Via Flickr / David Shankbone)

He says in the op-ed, Dylan was coached by her mother to make the accusation, which both Mia and Dylan have denied. Allen points out Mia refused to take a lie detector test while he did it willingly. (Via CBS)

He continues in the newspaper, "[But] even the venue where the fabricated molestation was supposed to have taken place was poorly chosen but interesting. Mia chose the attic ... a place she should have realized I’d never go to because it is a tiny, cramped, enclosed spot where one can hardly stand up and I’m a major claustrophobe. (Via The New York Times)

In the first paragraph of her Feb. 1 Op-Ed, Dylan wrote, "When I was seven years old, Woody Allen took me by the hand and led me into a dim, closet-like attic on the second floor of our house. He told me to lay on my stomach and play with my brother’s electric train set. Then he sexually assaulted me." (Via The New York Times)

Allen says the attic claim could have come from Dory Previn song, “With My Daddy in the Attic.” "It was on the same record as the song Dory Previn had written about Mia’s betraying their friendship by insidiously stealing her husband, André." (Via BBC / "The Old Grey Whistle Test​")

In his piece, Allen often refers to his 36-year-old son, Moses Farrow's, response to Dylan in an interview with People Feb. 5.

During which Moses said, "Of course Woody did not molest my sister ... My mother drummed it into me to hate my father for tearing apart the family and sexually molesting my sister ... "

An article, just one day later, Dylan also spoke with People and fired back, saying her heart is broken over her brother's claims.

Mia Farrow also publicly backed Dylan via Twitter wrote, "I love my daughter. I will always protect her. A lot of ugliness is going to be aimed at me. But this is not about me, it's about her truth." (Via Twitter / @MiaFarrow)

Allen ended his essay by saying he hopes he and Soon-Yi will one day reestablish a relationship with Dylan. He also said he won't make any more comments regarding the accusations because "enough people have been hurt."