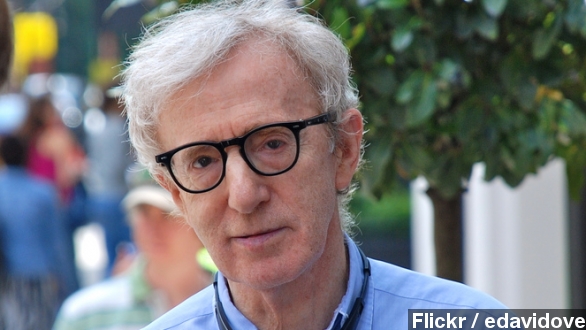 By Matt Picht
February 2, 2014
Allen's representatives rejected Dylan Farrow's allegations that the famous director sexually abused her when she was seven.
SHOW TRANSCRIPT

Famed director Woody Allen is speaking out against allegations that he molested his adopted daughter, Dylan Farrow, when she was seven. Or, at least, his spokespeople are speaking out.

In an email to Mother Jones, Allen's lawyer wrote, "It is tragic that after 20 years a story engineered by a vengeful lover resurfaces after it was fully vetted and rejected by independent authorities. The one to blame for Dylan's distress is neither Dylan nor Woody Allen."

And in a seperate statement, Allen's publicist said the director found Dylan's accusations "untrue and disgraceful. ... The experts concluded there was no credible evidence of molestation; that Dylan Farrow had an inability to distinguish between fantasy and reality; and that Dylan Farrow had likely been coached by her mother Mia Farrow." (Via Gawker)

Allen was responding to an open letter by Dylan Farrow, published in The New York Times, which gave a graphic retelling of the alleged abuse. She called Allen "a living testament to the way our society fails the survivors of sexual assault and abuse."

Dylan's accusations first made headlines in 1992 during Allen's split with his former lover Mia Farrow. The case was never taken to court.

Dylan's letter has prompted plenty of response, especially after she accused certain Hollywood stars who worked with Allen, including Cate Blanchett and Alec Baldwin, of ignoring her story. Both Blanchett and Baldwin have responded by refusing to take sides in the debate. (Via The Hollywood Reporter, Us Weekly)

As for Dylan Farrow herself, the Times reporter who obtained her letter told People she was heartened by all the support she received after it was published.

"She sends a big thank you to all those speaking up about sexual abuse and trying to break the silence. ... She was nervous about what the reaction would be to an essay so personal, but she put herself out there."

Debate over Allen's alleged sexual assault was recently reignited after the director received a lifetime achievement award at the Golden Globes.