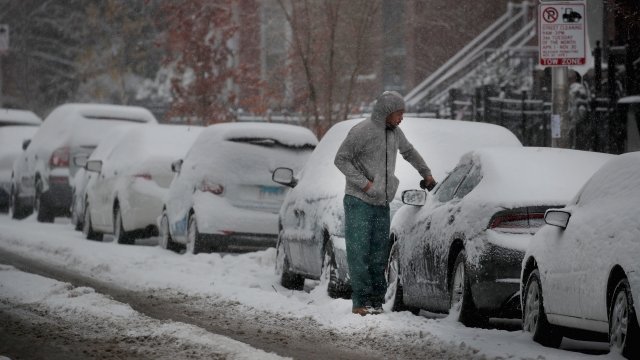 By Stephanie Liebergen
November 26, 2018
Thousands of flights were canceled Sunday and Monday as a storm dropped more than a foot of snow across the midwest.
SHOW TRANSCRIPT

A major winter storm is making post-Thanksgiving travel a bit of a nightmare.

The storm stretched from Kansas to Michigan and caused blizzard-like conditions in some areas. Snowfall totals ranged from a few inches to more than a foot. That wet weather prompted more than 7,000 U.S. flight cancellations or delays on one of the busiest travel days of the year.

The airports in Kansas City and Chicago were the hardest hit. KC's airport shut down for about four hours Sunday, and Chicago's two airports canceled more than 900 flights that were scheduled to fly into or out of the Windy City.

The storm was still causing problems to start the work week. O'Hare Airport had over 670 cancellations by 8:00 a.m. local time on Monday.