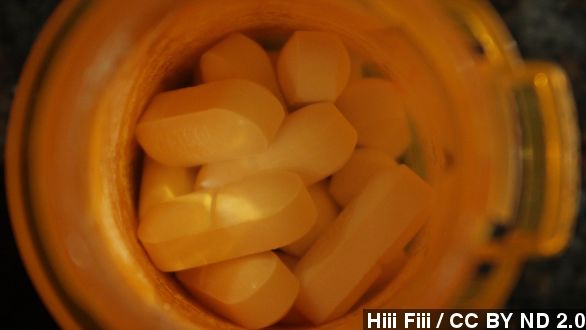 The Drug Enforcement Administration has announced tighter restrictions on prescription painkillers in an effort to curb drug abuse in the U.S.

Hydrocodone is one of the most prescribed and most abused painkillers in the U.S. The move is part of the government's effort to reduce what it calls a growing epidemic of prescription drug abuse.

The Centers for Disease Control and Prevention estimates 15,000 deaths in 2008 were due to prescription painkiller overdoses, compared to just 4,000 in 1999.

The Food and Drug Administration first recommended the restrictions in January 2013. The new rules will put tighter regulations on doctors as well as manufacturers and pharmacies.

Under Schedule II regulations, doctors can only prescribe a supply of the drug limited to 90 days with no refills. And one medical professional tells The Wall Street Journal pharmacies will now have to keep those drugs secured and will only accept written prescriptions.

Other experts think it might make it more difficult for those who rely on these medications for chronic pain to keep their prescriptions filled.

According to USA Today, the FDA has resisted implementing similar regulations in the past for this exact reason. But it finally changed its stance amid the growing number of reports of widespread abuse.

But one addiction specialist tells The New York Times the change might even cause a hike in the use of other illegal drugs such as heroin.

Others question whether these regulations are comprehensive enough.

FOX BUSINESS: "It's people going in the medicine cabinet, it's illegal drugs, prescription drugs getting on the illegal market. The government needs to do more. ... Oxycodone is already in Schedule II, that causes more deaths."

The new regulations will take effect in October.