Why So Much Love For The Lego Movie? 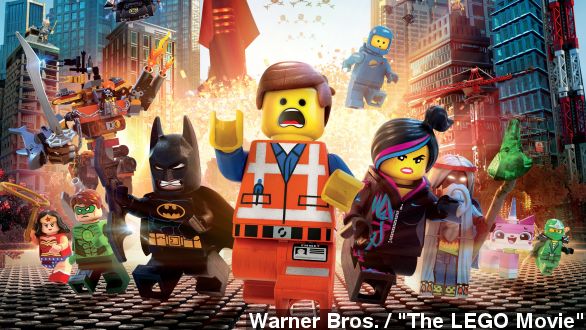 SMS
Why So Much Love For The Lego Movie?

By Matt Picht
February 9, 2014
The animated blockbuster earned more than $69 million on its opening weekend, helped by rave reviews from critics.
SHOW TRANSCRIPT

So, "The LEGO Movie" came out this weekend, becoming the latest in a series of big-budget, action-packed films cashing on children's toys from the past. The difference? Apparently, this one's actually pretty good.

The animated film features an everyman LEGO worker who is accidentally swept up in a rebellion against the conformist dystopian LEGO society after being mistaken for a savior by a group of freedom fighters. (Via Warner Bros. / "The LEGO Movie")

There are silly jokes, and pop culture references, and in the end creativity and individuality triumph over conformity. Sounds like typical kids-movie schlock, right? Well, you'd be surprised.

"I went into this movie just dragging my heels, with dread, and I came out, and I swear to God, this is the first great cinematic experience of 2014." (Via The Boston Globe)

Yes, against all expectations "The LEGO Movie" has become a critical darling. The film's getting high scores on Rotten Tomatoes, CinemaScore, and Metacritic.

A Salon writer calls the movie a delightful surprise for adults. "What could easily have been test-marketed, corporate-processed crap ... instead becomes a surprisingly enjoyable and satisfyingly dense family entertainment."

The high praise is backed up by high profits: "The LEGO Movie" raked in $69.1 million on opening weekend. Forbes notes that's the second-largest February opening in history, behind the $83 million brought in by "The Passion of the Christ".

Not bad for a film about plastic bricks. But what's made "The LEGO Movie" such a big hit?

Slate's movie critic says low expectations certainly were a factor. "I went in hoping at best for something intermittently amusing, not too visually and sonically assaultive, and over soon."

And a lot of the credit for the movie's success is being attributed to its dynamic director duo of Phil Lord and Chris Miller. The minds behind "Cloudy With a Chance of Meatballs" and "21 Jump Street" told ScreenCrush they couldn't resist the challenge of trying to make a smart LEGO movie. (Via Flickr / Gage Skidmore)

"There's only a very narrow path to go where it doesn't feel like a 90-minute commercial. Challenge accepted! And, that's sort of the way we do things, unfortunately."

Of course, the film has attracted its fair share of criticism as well. Several reviewers, including a writer for Time, found the film's anti-corporate message a little hypocritical coming from the multibillion dollar LEGO corporation.

"If the Lego Movie workers have seized the means of production, it’s only to increase production — to sell more toys, and tickets."

And a couple of Fox Business hosts took issue with the movie's portrayal of its lead villain — Lord Business.

"What is the purpose of trying to indoctrinate kids in a movie? I mean, I guess they believe this movie is going to make a lot of money, so no matter what they can embed these kinds of anti-capitalist messages and get away with it."

And although "The LEGO Movie" is stealing the spotlight, it wasn't the only movie to come out this weekend. George Clooney's "The Monuments Men" pulled in a respectable $22 million, while "Vampire Academy" struggled with only $4.1 million.