Why Do So Many Sports Championships Result In Riots? 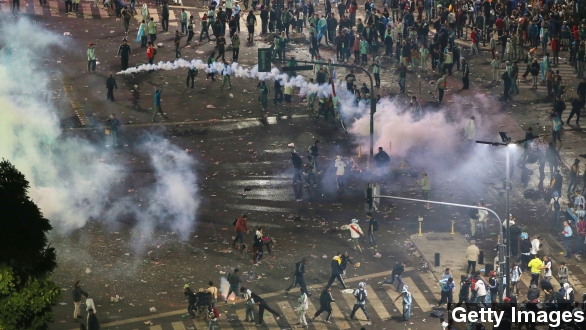 SMS
Why Do So Many Sports Championships Result In Riots?

By Cliff Judy
July 14, 2014
Police in Buenos Aires had to break up rioting and apparent looting after Argentina lost in the World Cup Final Sunday night.
SHOW TRANSCRIPT

Some sore losers might literally be that after riots Sunday night in Argentina following the South American country's World Cup Final loss to Germany. (Via Getty Images)

By Monday morning, the arrest total had climbed to at least 50 people. (Via BBC)

By most media accounts, the immediate aftermath of Argentina's loss was peaceful with thousands gathering in Buenos Aires near the national monument Obelisco. (Via Getty Images)

But Todo Noticias in Argentina had cameras in that square after federal police cleared the area. Several reports described young people with rocks as the main source of the damage.

But why the uproar? By most accounts, Argentina played above its expected ceiling by making it to the final and was widely expected to get beaten badly by a German team packed with goal scorers. You'd think such a performance would be a point of pride.

Of course, this violence adds to the list of riots following major sports games. It wasn't even anger over championships as some people in host country Brazil rioted after it lost in this year's World Cup semifinals. (Via CNN, NBC, Daily Mail)

"You got the anonymity of the mob. ... There's a culture around this, that sports fans think they're supposed to do something crazy or something radical when their team wins, to show how good of fans they are." (Via Fox Sports)

But to be fair, while these thousands caught the attention of cameras and media worldwide, they're still largely the exception to the rule of a population who stayed quietly sullen in loss. (Via Getty Images)

Hundreds of Argentines greeted and cheered their team's bus as it pulled into the team hotel in Rio. (Via Sky News)

The BBC reports 15 police officers were injured clearing the square of rioters in Buenos Aires.