Why Do We Care So Much About NBA Players' Legacies? 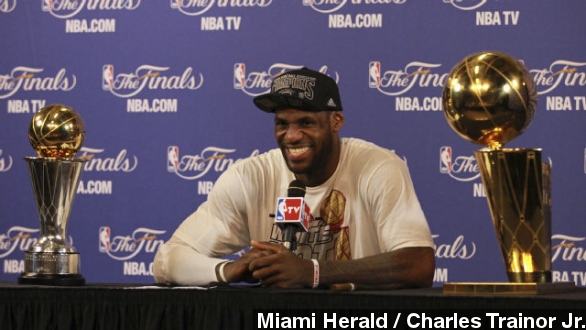 SMS
Why Do We Care So Much About NBA Players' Legacies?

By Nathan Giannini
June 5, 2014
The NBA Finals tip off Thursday night, and the media seems very concerned about how it will affect the legacies of pretty much everyone involved.
SHOW TRANSCRIPT

Grantland's Bill Simmons even wrote about the legacy of Game 6 of last year's finals.

The media seem very concerned about what a Heat win or a Spurs win would mean for the legacies of pretty much everyone involved. And for good reason, it seems.

Another Larry O'Brien trophy for the Spurs would give Duncan and Coach Pop five, tying for the most in the post-Michael Jordan era. In the all-time history of the NBA, only 25 players and four coaches have five or more. (Via Flickr / Keith Allison)

For James and the Heat, it would wrap up a three-peat, something that's been done just three times in the postmerger NBA. It would also put James halfway to Jordan's six titles, which is the benchmark in pretty much any "Greatest of All Time" debate. (Via Flickr / Keith Allison)

But James doesn't seem too worried about all of that right now, calling the talk "kind of stupid."

"My legacy will speak for itself after I'm done playing. ... It's something I can't control. I worry about what I can control, and that's how I approach the game on and off the floor, every single day." (Via USA Today)

So why are legacies so important to so many of us? According to Will Leitch of Sports on Earth, it's because we're all dying. Seriously. Bear with us on this one.

He goes on to note all of these guys will be rich, famous and beloved for the rest of their lives; one more title won't really change any of that.

And he's probably right. However, while you're still alive, if you'd like to enjoy Game 1, it tips off in San Antonio Thursday night at 9 p.m. Eastern.