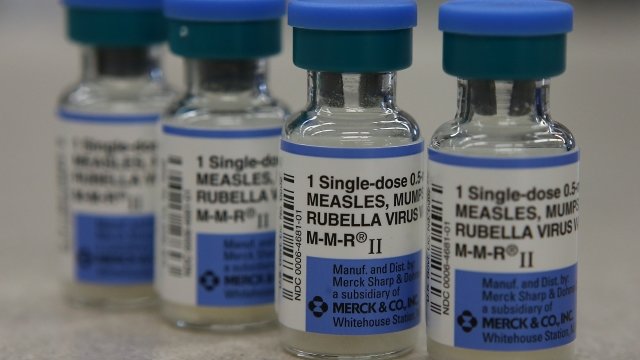 By Andrea Gonzales
December 1, 2018
The greatest spikes in measles cases occurred in the Americas, the Eastern Mediterranean and Europe, according to a new WHO report.
SHOW TRANSCRIPT

The number of reported measles cases around the world increased by more than 30 percent from 2016 to 2017. A new report by the World Health Organization and the CDC attributes that to a gap in vaccine coverage.

Measles outbreaks increased in all but one of the WHO regions — the Western Pacific, which actually reported a decrease in cases. That region is also the only one to have maintained 95 percent coverage of the vaccine's first dose, while global coverage has stalled around 85 percent.

The WHO's deputy director general for programmes expressed concern about the vaccine gap. She said in a statement, "Without urgent efforts to increase vaccination coverage and identify populations with unacceptable levels of under-, or un-immunized children, we risk losing decades of progress in protecting children and communities against this devastating, but entirely preventable disease."

Measles is a viral illness that can be prevented with two vaccine doses. The CDC reports the vaccination prevented an estimated 21.1 million deaths from 2000 to 2017.

Meanwhile, epidemiologists have connected a measles outbreak in the European Union to falling vaccine rates there. NPR reports those falling rates are due to inconsistent availability and anti-vaccine movements.