Where Did The Omicron COVID Variant Come From? 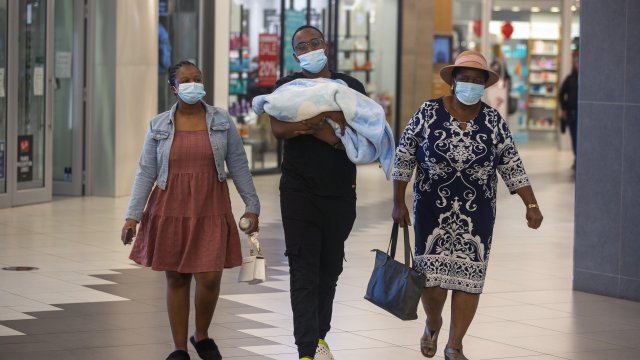 SMS
Where Did The Omicron COVID Variant Come From?
By Associated Press
By Associated Press
November 26, 2021
It's unclear where the new variant actually arose, but it was first detected by scientists in South Africa and has now been seen internationally.

South African scientists identified a new version of the coronavirus this week that they say is behind a recent spike in COVID-19 infections in Gauteng, the country’s most populous province. It's unclear where the new variant actually arose, but it was first detected by scientists in South Africa and has now been seen in travelers to Belgium, Botswana, Hong Kong and Israel.

Health Minister Joe Phaahla said the variant was linked to an “exponential rise” of cases in the last few days, although experts are still trying to determine if the new variant is actually responsible.

From just over 200 new confirmed cases per day in recent weeks, South Africa saw the number of new daily cases rocket to 2,465 on Thursday. Struggling to explain the sudden rise in cases, scientists studied virus samples from the outbreak and discovered the new variant.

In a statement on Friday, the World Health Organization designated it as a “variant of concern,” naming it “Omicron” after a letter in the Greek alphabet.

After convening a group of experts to assess the data, the U.N. health agency said that “preliminary evidence suggests an increased risk of reinfection with this variant,” as compared to other variants.

“The number of cases of this variant appears to be increasing in almost all provinces in South Africa,” the WHO said.

It appears to have a high number of mutations — about 30 — in the coronavirus’ spike protein, which could affect how easily it spreads to people.

Sharon Peacock, who has led genetic sequencing of COVID-19 in Britain at the University of Cambridge, said the data so far suggest the new variant has mutations “consistent with enhanced transmissibility,” but said that “the significance of many of the mutations is still not known.”

Lawrence Young, a virologist at the University of Warwick, described omicron as “the most heavily mutated version of the virus we have seen," including potentially worrying changes never before seen all in the same virus.

Dr. Anthony Fauci, the U.S.' top infectious diseases doctor, said American officials had arranged a call with their South African counterparts later on Friday to find out more details and said there was no indication the variant had yet arrived in the U.S.