We Attempt To Solve The Brainteaser Currently Plaguing The Internet 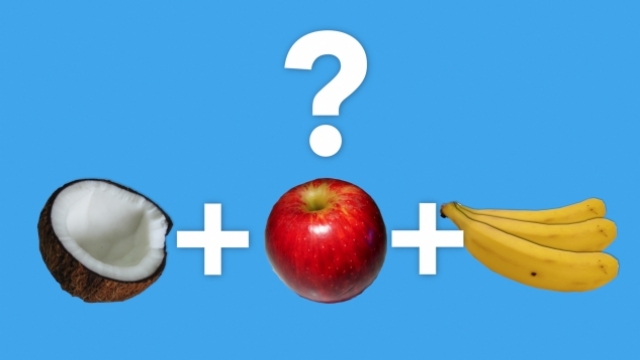 SMS
We Attempt To Solve The Brainteaser Currently Plaguing The Internet
By Katherine Biek
By Katherine Biek
February 17, 2016
A brainteaser being passed around on social media is tripping up a lot of people. So we set out to solve it.
SHOW TRANSCRIPT

Love brainteasers? Good luck with this new one that's making the rounds online. It consists of several math equations involving fruit that no one can figure out. We're going back to elementary school math here, folks.

The next equation is this: one apple, and two bundles of four bananas. It equals 18. We already know one apple equals 10, which means each bundle of four bananas equals, well, 4.

Now, the puzzle creators upped the ante a bit with their next equation by including subtraction.

OK, really, really basic subtraction, but still. A bundle of four bananas minus two halves of a coconut equals 2. So the two halves must equal 2.

It's the last equation that's tripping people up: A coconut plus an apple plus a bundle of bananas equals what? If you look closely though, you'll notice there's something a tad different about the fruit this time around.

To have some fun, we decided to put this final addition problem to the test and have some co-workers try to solve it.

If you guessed 14, A+ and a gold star for you! Your eagle eyes caught there was only one half of a coconut and a bundle of just three bananas.

Still, Mashable reports there are some who think the coconut will always equal 2, despite only one half being shown, and the bananas will similarly always equal 4, resulting in an answer of 16.

Does your brain hurt yet? Ours do.