Wait. Rihanna Needs How Many More No. 1 Hits To Top The Beatles? 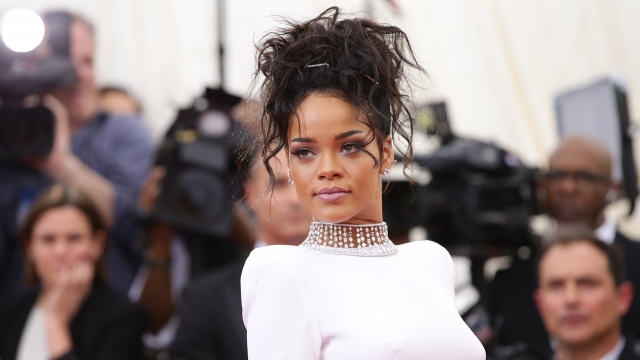 Rihanna's newest single, "Work" featuring Drake, is on top of the Billboard Hot 100 chart for the second week in a row.

It's the Barbadian singer's 14th No. 1 hit following the trend of some of her other songs like "Diamonds," "Umbrella," "We Found Love" and "Only Girl (in the World)."

This is a big achievement since it puts Rihanna ahead of some pretty well-known entertainers.

Stevie Wonder and Janet Jackson are tied with 10 No. 1 singles each.

"Hey, Mister DJ, put a record on. I wanna dance with my baby," Madonna sang.

And Michael Jackson had 13 singles hit No. 1.

But Rihanna will have to spend a lot more time in the recording studio to beat these last two artists.

Mariah Carey comes in second with 18 No. 1 hits.

"Baby, all I want for Christmas is you!" she sang.

Interestingly, this Christmastime favorite is not one of her chart-topping hits.

And the Beatles take first place. Rihanna will have to produce six more No. 1 hits to beat The Fab Four, who hold the record with 20 chart-topping hits.

The English rock band managed this impressive feat over just six years, starting with "I Want to Hold Your Hand" in 1964 and ending with "The Long And Winding Road" in 1970.

And even though Rihanna needs six more No. 1s to catch up to The Beatles, she's already spent "FourFiveSeconds" with Paul McCartney himself. Looks like she's learning from the right people.

This video includes clips from Def Jam Recordings, Epic Records, Capitol Records and CBS and images from Getty Images and music from Rockit Maxx / CC BY 4.0.