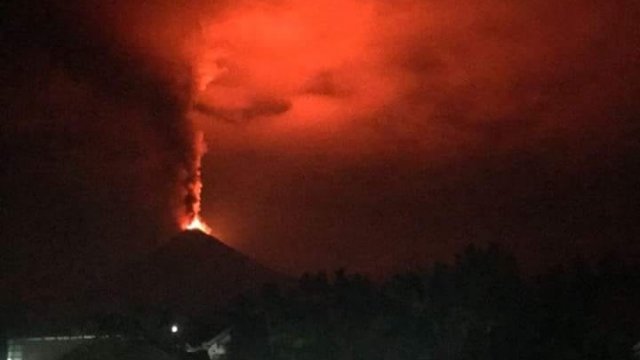 As Indonesia struggles to recover from last week's deadly natural disasters, now one of the country's volcanoes is a concern too.

Mount Soputan started erupting Wednesday and shot a thick ash cloud about two and a half miles up. That volcano is on Sulawesi, the same island hit hardest by Friday's 7.5 magnitude earthquake and corresponding tsunami. The eruption prompted the government to increase the volcano's warning level and tell people living in the area to protect themselves from ash and look out for lava flows.

Meanwhile, the death toll from the quake and tsunami continues to rise. The latest estimate from Indonesia's disaster management agency is over 1,400, but that number is expected to keep going up. The Indonesian Red Cross says over 2,500 people have serious injuries and more than 70,000 people have been displaced.

It's been six days since the twin disasters struck, but initial recovery has been slow. Many of the survivors are frustrated with the government's response and the lack of basic necessities like food and water. An increasing amount of supplies and aid is starting to get to those in need. Dozens of countries, including the U.S., have offered to help.