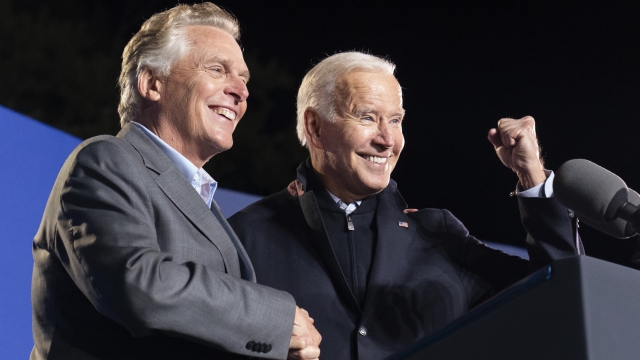 SMS
Virginia Election Could Become Glimpse To Future
By Alexandra Miller
By Alexandra Miller
October 27, 2021
Democrats have a lot riding on this race. President Biden, who won the commonwealth in 2020 by 10 points, is staring down his lowest approval ratings.

Virginians go to the polls in less than a week and for Democrats, this year's most closely watched campaign feels a lot like 2020.

"I ran against Donald Trump, and Terry is running against an acolyte of Donald Trump," President Joe Biden said.

The president made an appearance Tuesday night at Democratic gubernatorial candidate Terry McAuliffe's rally and spent more time talking about his former opponent than McAuliffe's.

"He doesn't want to talk about Trump anymore. Well, I do," the president said. "Talk about an oxymoron — Donald Trump on election integrity. I can't believe he puts the word trumping integrity in the same sentence."

McAuliffe, himself, was trying to tie GOP candidate Glenn Youngkin to the 2017 'Unite The Right' rally in Charlottesville and to "the big lie" that the 2020 presidential election was stolen.

"He is ending his campaign the way he started it with divisive dog whistles," McAuliffe said. "Even after the deadly attacks on Jan. 6, Glenn Younkin launched his campaign by promoting election conspiracy theories."

Democrats, nationally, have a lot riding on this race. President Biden, who won the commonwealth in 2020 by 10 points, is staring down his lowest approval ratings yet — down double digits since taking office, with the pullout from Afghanistan and a stalled Congressional agenda weighing on him.

"He's on the wrong side of every single issue," Youngkin said. "And therefore, he doesn't want to run against me. He's trying to figure out somebody else to run against, and he makes it up every day. I've never seen anybody more comfortable with, basically, untruths than Terry McAuliffe."

Youngkin has former President Trump's endorsement but has not campaigned with him. The former businessman has positioned himself as an outsider harnessing frustration in the state with school boards and COVID mandates.

But national politics are also motivating Democratic voters in Virginia. Nancy DiPaolo is voting for McAuliff because she liked how he did during his first term as Virginia’s governor seven years ago. But she isn't happy with the way things are going down the road in Washington.

"Things aren't going the way they should be," DiPaolo said. "The pullout was horrific. And I think there's a lot of blame to go around there, and he is the president, so we get to put some blame there. And the reality is, right now, the party isn't coming together, and he hasn't been able to rally Congress the way we need him to — the way the country needs him to — however that compromises. So I think he's doing a good job."

And in the closing days of this campaign, there's another major issue has emerged for Democrats — protecting women's reproductive rights.

"We cannot turn into Texas. And anyone who thinks we can't — it can happen," DiPaolo said.

Historically, both parties have reasons to be optimistic heading into Tuesday. Democrats have swept statewide elections in Virgina in recent years. But, voters have elected a governor of the opposite party to the president in every race since the late 1970s with one notable exception — Terry McAuliffe's victory in 2013 while President Barack Obama was in office.