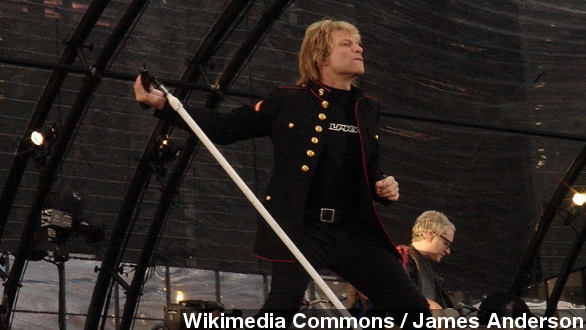 By Nathan Byrne
November 21, 2013
&quot;Livin&#039; on a Prayer&quot; has found its way back onto the Billboard charts, thanks to a 4-year-old viral video that&#039;s seen a comeback of its own.
SHOW TRANSCRIPT

When Bon Jovi sang the lyrics "we're halfway there," there couldn't have been any way of knowing that "there" meant that moment when a 26-year-old song would find itself vaulted back onto the Billboard charts — thanks to a YouTube video.

This video first made the rounds in 2009. It's a guy named Jeremy Fry at a Boston Celtics game, dancing and air-guitaring to Bon Jovi's "Livin' on a Prayer." (Via YouTube / UncleCharlie99)

So, as Variety explains, both the Bon Jovi ballad and the viral video are making comebacks. The video of Fry made a resurgence on a site called Utrend.tv in mid-October.

According to Billboard, the '80s song largely owes its resurrection to the 11 million streams of that video since October. But it's also seen an increase to 4,000 paid downloads of the song.

A Philly.com blogger credited "nerds" for the change in how the charts are determined, saying, "Now, the Internet has a hand in what makes the cut because YouTube views are factored into the process."

The strategy here appears to be "If at first you succeed, wait a few decades for your hit song to be attached to a viral video."

In some cases, maybe more than once. Remember that Jay Leno skit with karaoke-ing couple at the gas station? Sites like The Smoking Gun revealed it as a fake.

But not before achieving viral-video status — and breathing new life into that old song. (Via ABC)

And — in the spirit of Bon Jovi-themed virality Thursday — BuzzFeed offered this list of "40 Cats Who Give Love a Bad Name."

But not many hair-band legends can sit around in the twilight of their careers and let the Internet do the heavy lifting. Guys like Jon Bon Jovi — they'll be there for you, maybe even at your wedding.

"Australian bride Branka Delic had waged a Web campaign begging the star to do the honors. She had no idea that he would actually show up." (Via NBC)

We'll have to see if Bon Jovi keeps showing up on the charts. In case you wondered, "Livin' on a Prayer" topped the Billboard charts for four weeks in 1987.