Violence Breaks Out In Paris During May Day Rally 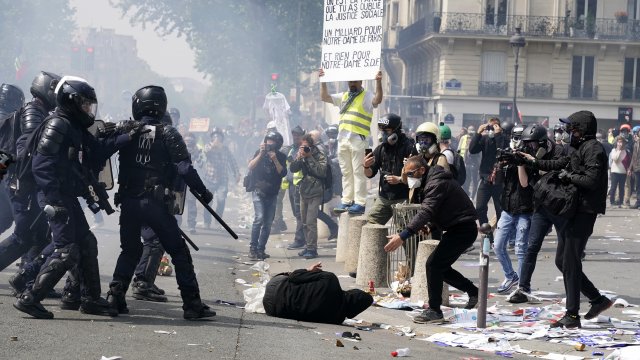 SMS
Violence Breaks Out In Paris During May Day Rally
By Alec Larson
By Alec Larson
May 1, 2019
​The May Day rallies, held annually on May 1 to mark International Workers' Day, have been going on since the 1880s.
SHOW TRANSCRIPT

Thousands of demonstrators took to the streets for a May Day rally in Paris on Wednesday, with violence breaking out as protesters fought with French authorities.

The May Day rallies, held annually on May 1 to mark International Workers' Day, have been going on since the 1880s with thousands of Parisians typically in attendance. The demonstrations began as a way for labor movements to campaign for better work conditions.

According to the New York Times, police said there were around 28,000 demonstrators at the event, while a Parisian media consortium said the number could be as high as 40,000. The group reportedly included union members, vandals, and yellow vest protesters.

Police in Paris expected a larger, and potentially more violent crowd this year in the midst of the ongoing yellow vest protests. More than 7,000 officers were deployed this year, compared to the nearly 1,500 that patrolled the event last year.

French authorities said police arrested around 200 demonstrators so far, many of them for violence during the rally.