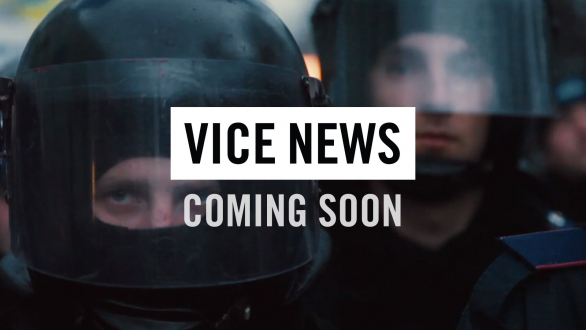 SMS
Vice Previews Its New 24-Hour News Network
By John O'Connor
By John O'Connor
December 28, 2013
Vice Media is looking to expand its news division, now featured on its own site and on HBO, into a 24-hour news channel.
SHOW TRANSCRIPT

Looking to challenge traditional 24-hour cable news networks, Vice Media announced earlier this year it would be launching one of its own in 2014. And now the company has released its first take of what that network might look like.

Vice released this trailer Friday to promote Vice News, the company's soon-to-come 24-hour news network that will focus on delivering global news stories from hostile places such as Liberia, Venezuela and North Korea. (Via Vice)

In a profile of the company published this past spring, The New Yorker explains:

“[Vice] plans to create a ‘twenty-four-hour global news channel,’ by turning its foreign offices into news bureaus that will report, in real time, on events in their regions. Vice is opening bureaus as quickly as traditional-media organizations are closing them.”

Vice, which was founded in 1994, gained national attention earlier this year when it documented former NBA baller Dennis Rodman's trip to North Korea.

It was the first time an American had met with North Korean leader Kim Jong Un since he came to power in 2011. The documentary, called "Basketball Diplomacy," aired as a mini-series on HBO.

Vice also has a new financial backer with some deep roots in the world of cable news.

Mediaite reports after Vice announced it's new 24-hour news network: "News Corp. chairman Rupert Murdoch acquired a 5% stake in VICE with a $70 million investment, meaning he could be helping to back Fox News’ newest competitor in 2014."

The Vice News YouTube channel, which was created just Friday, has a little more than 3,000 subscribers as of Saturday morning.