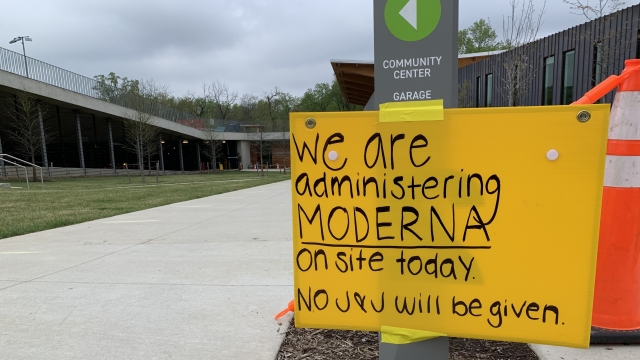 Many states had to move quickly Tuesday to pause distribution of the Johnson and Johnson coronavirus vaccine. But that quick decision at the state level caused a scramble on the ground, like at this vaccine clinic in Virginia.

"We quickly jiggered. We were able to identify an opportunity for today's clinic to offer Moderna. For appointments later in the week we're still in the process of evaluating what we can do to get those individuals in. We may need to reschedule but we'll know more as the week goes on," said Bryna Helfer, assistant county manager and director of communications for Arlington County.

The Centers for Disease Control and Prevention and the Food and Drug Administration are investigating a possible link between the J&J vaccine and a dangerous blood clotting condition. The side effect is extremely rare. There are just six known cases in the U.S. among the nearly 7 million J&J vaccines that have been administered.

The White House on Tuesday sought to reassure Americans that the pause would not impact the pace of vaccinations.

“So we have more than enough supply of Pfizer and Moderna vaccines to continue the current pace of about 3 million shots per day," White House COVID-19 Response Coordinator Jeff Zients told reporters Tuesday.

At this vaccination site in Arlington County, Virginia, organizers didn’t want to have to cancel existing appointments. Anyone expecting to get the one-shot J&J vaccine here on Tuesday, instead got Moderna’s and vaccine recipients told me any jab is better than no jab.

"I was relieved to still have an appointment. A little disappointed it was two doses instead of one but just grateful to have a vaccine," said Laura Carpenter, 29.

"It still didn't really affect how I felt, as long as I got the vaccine I was happy with it," Alexis Campbell, 23, said.

This clinic was able to swap in Moderna vaccines quickly because they already had a new shipment on hand.

By the end of the day Tuesday, Arlington County health officials had contacted everyone with a J&J vaccine appointment through April 18 to tell them they'll be offered the Moderna or Pfizer vaccine instead.

Providers are not required to stop using the J&J vaccine. For now, the pause is just a recommendation while the investigation into this blood clotting side effect continues.

Dr. Fauci: More Challenges For Vaccines Ahead In The Next 100 Days

NY Gov. Andrew Cuomo To Reporters: I Didn't Do Anything Wrong

Where Does the Economy Stand After Biden's First 100 Days?

Inside The Effort To Support Black Farmers

How Racism Played A Part In Shaping The U.S. Highway System