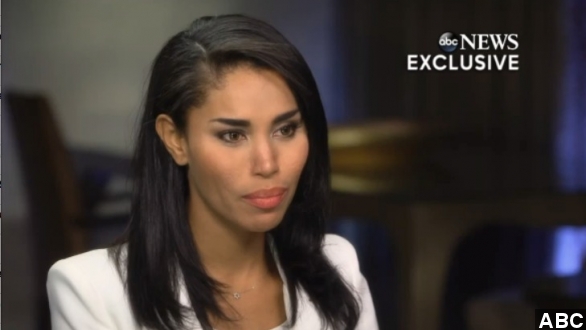 By Christine Slusser
June 2, 2014
V. Stiviano was allegedly attacked near a hotel. Her assailants reportedly beat her and yelled racist slurs.
SHOW TRANSCRIPT

"Her lawyer has confirmed to ABC news she was examined by a doctor and found to be 'banged up, but okay.' The NYPD says she has not filed a police report."

ABC says the attack happened outside of the Gansevoort Hotel in New York City. CNN is reporting she was attacked leaving a restaurant near the hotel.

Stiviano's attorney says some men followed her while yelling racial slurs and then punched her. The attorney says it left "the right side of her face red and swollen."

Stiviano has certainly made enemies since someone leaked the recording of Sterling, who could soon be the ex-owner of the LA Clippers. In the now infamous recording, he chides Stiviano for bringing black people to LA Clippers games.

Last month, former Dodgers manager Tommy Lasorda said he hoped Stiviano would get hit with a car. (Via USA Today)

As for 80-year-old Sterling, since the leak of the recording, he was banned from the NBA for life and fined $2.5 million.

Sterling's wife has signed a contract to sell the Clippers to former Microsoft exec Steve Ballmer. (Via The New York Times)

While The New York Times reports Sterling's position on the sale is uncertain, he made it clear Friday he's not ready to go away quietly.

NBC reports he is now suing the NBA for banning him — the suit says Sterling is seeking $1 billion in damages.

As for Stiviano, ABC reports police aren't expecting any charges, calling it a case with "no legs." Her lawyer expects she will file a police report Monday.