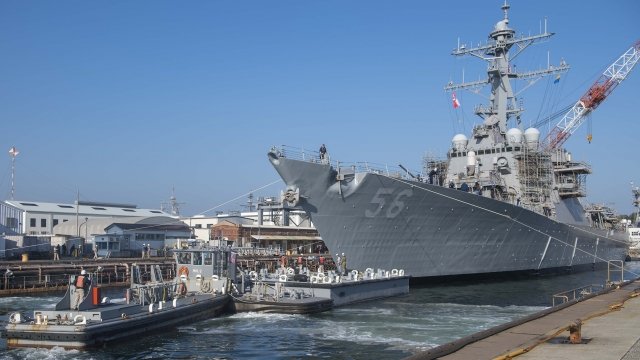 By Katherine Biek
November 29, 2018
Ten sailors died after it collided with a oil and gas tanker east of Singapore in 2017.
SHOW TRANSCRIPT

A Navy destroyer has returned to the water — more than a year after it was involved in a deadly collision.

Ten U.S. sailors on board the USS John S. McCain died after it collided with a civilian oil and gas tanker east of Singapore in August 2017.

The impact caused "significant damage" to the ship's hull, which resulted in heavy flooding in its sleep and machinery compartments.

For a majority of the 15 months since the collision, the Navy's been restoring the McCain at a facility south of Tokyo.

But this week, the McCain launched from dry dock, re-entering the water. It's now moored to a pier at its home port in Japan as part of the U.S. 7th Fleet. The Navy expects the McCain will be fully repaired by late 2019.