The US Is Spending More On Border Troops Than Immigration Judges 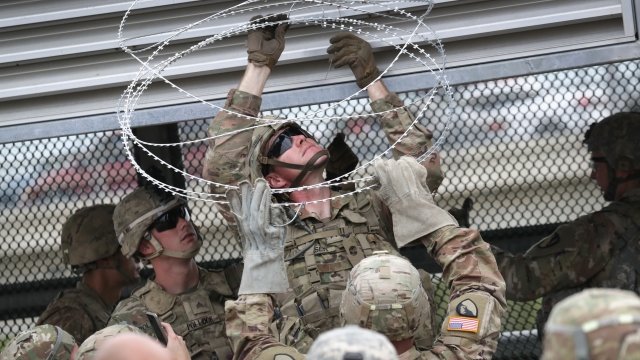 The Trump administration is spending at least $72 million to send troops to the U.S.-Mexico border as a caravan of migrants is arriving to seek asylum. The recently released price tag for a deployment that some commentators have deemed "a stunt" is, of course, controversial in and of itself.

But critics have also pointed out that the cost to taxpayers is nearly double what the White House requested in its 2019 budget to hire additional immigration judges.

Lawmakers on both sides of the aisle say allocating more funds to immigration courts is urgent because it would help reduce the massive backlog of immigration cases — which is quickly getting worse.

That's why critics of the deployment are dismayed by the administration's spending priorities.

Ocasio-Cortez asked on Twitter: "What if instead of sending 5k troops to the border, we had sent 5k caseworkers to review + process visa applications?"

The Pentagon estimates the $72 million price tag will cover the cost of the 5,900 troops deployed at the border until Dec. 15. If the operation lasts longer, the cost will increase.

In contrast, the federal budget for fiscal year 2019 allocated just $39.8 million to hire new judges and support staff. That's a 47 percent decrease from the previous year's budget. But it's enough for the Justice Department, which oversees the courts, to increase the number of immigration judges from around 400 today to 484 by 2019.