US Authorities Not Prosecuting Migrants Arrested In Border Clash 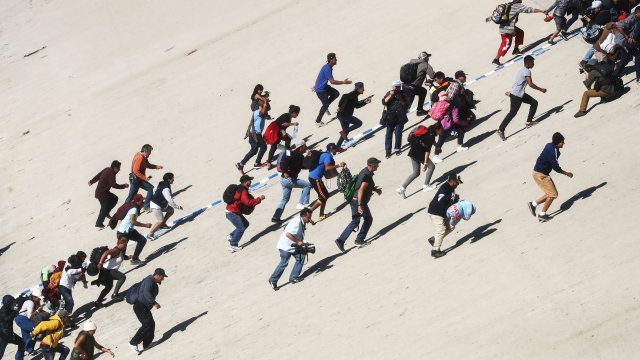 SMS
US Authorities Not Prosecuting Migrants Arrested In Border Clash

By Katherine Biek
November 30, 2018
Dozens of migrants were arrested after illegally crossing the U.S.-Mexico border and clashing with officers Sunday.
SHOW TRANSCRIPT

U.S. authorities are not filing criminal charges against any of the dozens of Central American migrants arrested for crossing the U.S.-Mexico border Sunday.

Forty-two people were arrested for illegal entry. A Department of Homeland Security spokesperson said 27 were men and the rest were women and children.

They were part of a crowd of nearly 500 migrants who tried to rush a port of entry near Tijuana, Mexico, or climb the fence on either side of it. U.S. Customs and Border Protection said some of its officers fired tear gas after some migrants threw projectiles at them.

There are currently more than 5,000 migrants staying in Tijuana, awaiting the chance to apply for asylum in the U.S.

A U.S. official told the Associated Press that there were various reasons Customs and Border Protection chose not to prosecute any of the arrested migrants — including not having enough information to build a case or not wanting to split up families. An agency spokesman said all 42 could face deportation.