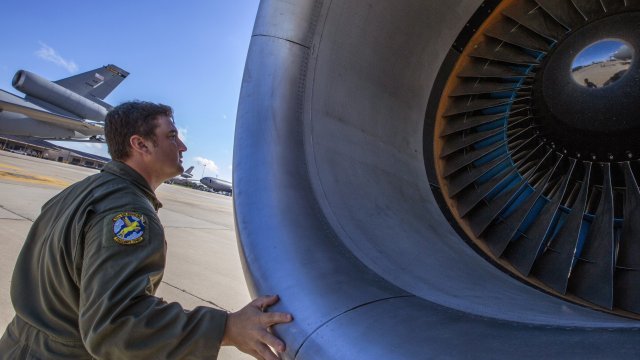 By Katie Cammarata
September 18, 2018
The increase would bring Air Force squadron numbers up to levels the U.S. hasn't seen since the Cold War.
SHOW TRANSCRIPT

The U.S. Air Force needs more squadrons to be able to compete long-term with China and Russia. That's according to an internal study into the military branch.

The study says that the Air Force needs to increase by about 24 percent in the next 12 years. That would mean upping personnel levels by about 40,000 service members — on top of how much the Air Force is already projected to grow.

It would bring Air Force squadron numbers up to levels the country hasn't seen since the Cold War.

The personnel increase hasn't been worked into the Pentagon budget yet, and senior officials aren't even sure how much it'll cost. A statement from the Air Force emphasized that the study was "driven by strategy and not by budget."

Air Force officials say the service has a list of threats it has to be ready to react to, including cyber threats, extremist movements and China's increasing military investments.

Air Force Secretary Heather Wilson said: "The Air Force is too small for what the nation is asking us to do."

That said, the internal study is preliminary. A more complete version will reportedly be presented to Congress early next year.