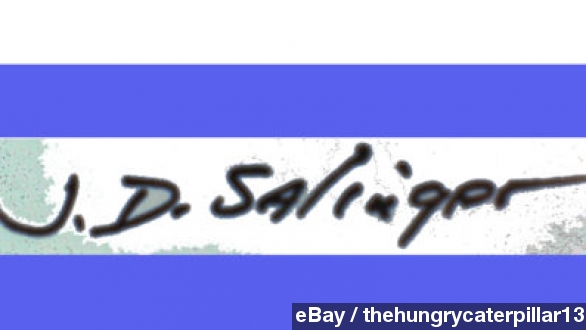 It’s a mystery. How did three J.D. Salinger books get leaked online, and end up in the hands of a buyer in London?

“They were leaked online and showed up on eBay. Among the tales, a loose predecessor of the ‘Catcher in the Rye’. It wasn’t supposed to be published until 2060.” (Via CBS)

Before Salinger passed away in 2010, he had written a series of short stories that form a larger, unpublished collection. They include The Ocean Full of Bowling Balls — which closely relates to The Catcher in the Rye — Birthday Boy, and Paula. (Via BBC)

Prior to now, you could only read a copy of The Ocean Full of Bowling Balls under supervision at Princeton University’s Firestone Library, and the other two were only available at University of Texas’ Ransom Center. (Via The Guardian)

These stories weren’t supposed to be published until 2060, in respect of Salinger’s will, which ordered they remain concealed until 50 years after his death.

And that was the case until now. The stories first showed up in a British eBay listing, and were sold for roughly $110 by an eBay member from Brentford in London.

It remains unclear where these stories first originated.

But a Salinger scholar Kenneth Slawenski confirmed the authenticity of the stories. In an email to Buzzfeed he wrote, “While I do quibble with the ethics (or lack of ethics) in posting the Salinger stories, they look to be true transcripts of the originals and match my own copies.”

Now, there are a few theories about how these “locked” stories made it into the public sphere.

According to a Princeton spokesman, “The story is probably an unauthorized version transcribed longhand in our reading room. It's also possible that it came from photocopies of the typescript probably made before the mid-1980's when we decided that we would no longer allow photo-duplication for any work by Salinger." (Via CNN)

Either way, a writer for The Verge stresses the importance of this leak.

“Salinger was a notoriously private man, and although his family will release some of his unpublished works starting in 2015, it's thought that the stories leaked today did not figure in the Salinger estate's plans.”

The Verge suggests the original eBay post may lead to the book’s origin. The auction had a full London address on it.