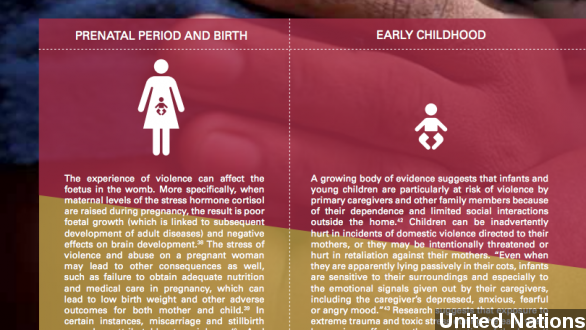 By Madison Burke
September 5, 2014
Among the heartbreaking findings of the United Nations report is the statistic that approximately 1 in 10 girls has been sexually abused.
SHOW TRANSCRIPT

The largest-ever report on violence against children has been released by the United Nations, and the findings are truly heartbreaking.

The report, called "Hidden in Plain Sight," is a statistical analysis of violence against children. It draws data from 190 countries.

It shows about 1 in 10 girls has been sexually abused and says 1 in 3 adolescent brides has experienced some kind of abuse. According to the report, about half of teen girls believe it's acceptable for a man to hit his wife under certain circumstances.

The report notes the children who are abused generally have lasting effects: Later in life, they're more likely to become unemployed, live in poverty and exhibit their own violent behavior.

In addition, it says 1 out of every 5 homicide victims is a child.

And the way the statistics are being reported by media, it's clear many of us didn't recognize the extent of these issues.

BBC: "Drawing on data from 190 countries, the report contains some grim statistics."

"Startling," "grim" and "shocking" were often used to describe the report in the media coverage, and that's likely the reaction the UN hoped for.

The release makes it clear the UN believes creating awareness is crucial to tackling this issue: "These are uncomfortable facts — no government or parent will want to see them. But unless we confront the reality each infuriating statistic represents ... we will never change the mind-set that violence against children is normal and permissible. It is neither," Lake said.

It's worth noting most media outlets chose to highlight the sexual assault statistic in their headlines, with the homicide statistic being the second most popular choice.