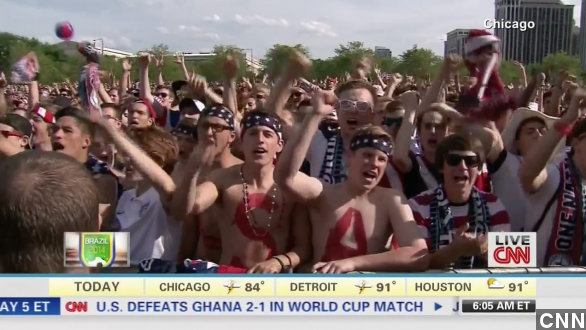 By Cliff Judy
June 17, 2014
Check out the intense celebrations, the postgame gaffes and the embarrassing move that already has one corporation apologizing after the U.S. win.
SHOW TRANSCRIPT

Go crazy, U.S. soccer fans. With a win Monday night against Ghana and a suddenly very realistic shot at getting out of group play at the World Cup, there probably aren't a whole lot of true fans who need to be told twice.

The fastest goal in U.S. World Cup history had crowds freaking out right from the start of Monday's game. And that's to say nothing of those who decided to get awesomely awkward on air. (Via CNN)

"We've got tons of great places to watch."

KGW-TV reporter Drew Carney's stripping of his station jacket to reveal a USA shirt might not have been the most journalistically unbiased display, but that video quickly went viral.

But as Americans living in a country where the sports scene is dominated by football, baseball and basketball, our enthusiasm in winning soccer games is tempered by the fact we're still learning.

JOE SCARBOROUGH, MSNBC ANCHOR: "I think this is the first time since 1930 we did something; I'm not sure."

EUGENE ROBINSON, MSNBC ANALYST: "This is only, I think, the fifth World Cup game the United States has ever won."

It's actually our eighth World Cup win all time.

But a slip of the tongue on live TV is a lot easier to digest than a carefully crafted graphic published to a corporate Twitter account. Before Delta Airlines could delete it, Mediaite, New York Daily News and others captured a tweet celebrating the 2-1 win with the Statue of Liberty behind a "2" and a giraffe behind a "1."

There are no giraffes in Ghana.

After a load of social media criticism and people pointing just that out, Delta deleted the tweet and issued an apology calling the picture inaccurate and inappropriate. (Via Twitter / @Delta)

We all have some time to get this right. USA's next game is Sunday against Portugal. Hopefully, we'll celebrate again — just not in exactly the same way.

​Oh, by the way — our chances to move on really did go way up. FiveThirtyEight now calculates USA's chances at 63 percent to get out of group play, up from 33 percent as of Monday morning.