U.S. To Keep Presence In Afghanistan Whether Or Not Deal Is Reached 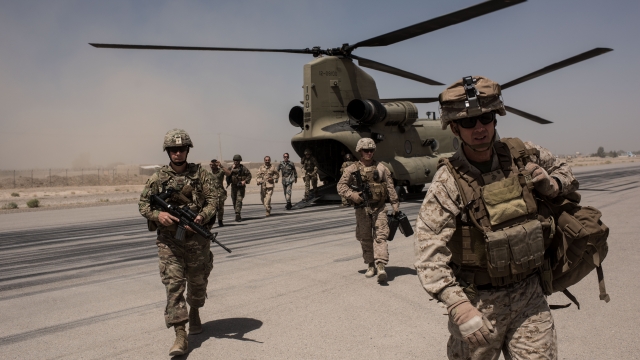 SMS
U.S. To Keep Presence In Afghanistan Whether Or Not Deal Is Reached

By LeeAnne Lowry
August 29, 2019
Negotiations have been going on in Qatar for almost a year.
SHOW TRANSCRIPT

The U.S. will keep a presence in Afghanistan whether or not a peace deal is reached with the Taliban.

President Donald Trump told Fox News radio on Thursday that the U.S. is reducing troops in Afghanistan from 14,000 to 8,600. It's unclear if more troops would be sent home if a peace agreement is reached, but the president said "we're going to always have a presence" in the country.

On Wednesday, the Taliban told international media that the countries are "close" to finalizing that agreement. It's aimed at ending the 18-year Afghan war — the longest war in U.S. history.

Negotiations have been held in Qatar since late 2018. The deal is expected to require concessions from the Taliban, including a cease-fire and a promise to start direct negotiations with Kabul to end the war. That's been a tough sell for the Taliban. According to Al Jazeera, it considers Kabul a "puppet regime" of Western nations.

The concessions on Washington's side could include an agreement to refer to the Taliban by the name of its former regime: "Islamic Emirate of Afghanistan." The U.S. previously rejected the regime as illegitimate.

The withdrawal of U.S. troops is expected to be gradual. Sources told American media earlier this month that the government also plans to scale back the U.S. embassy in Afghanistan.