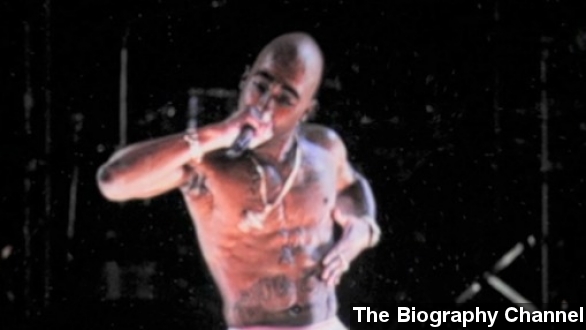 By Christine Slusser
January 8, 2014
The late rapper's lyrics will be featured in "Holler If Ya Hear Me," a nonbiographical Broadway musical about two friends in a Midwestern inner city.
SHOW TRANSCRIPT

Late rapper Tupac Shakur's lyrics will be featured in a new Broadway musical.

Vulture reports the musical is made up entirely of Shakur's lyrics and opens June 19 at Broadway's Palace Theatre.

Casting for the show has not yet been announced.

Entertainment Weekly says the musical isn't actually about the rapper at all. The plot is about two friends living in the inner city in the Midwest.

Shakur was attacked in a drive-by shooting Sept. 7, 1996. He died less than a week later. (Via The Biography Channel)

REPORTER: "Yet rumors still exist that he remains alive."

BILLY JOHNSON JR.: "For the first 10 years after his passing, six albums were released, and each of them had his records on them."

Most recently, Shakur "made an appearance" at Coachella in 2012 thanks to some CGI magic.

As for the new musical, ​the official website says the Broadway preview begins May 26. Tickets are not yet for sale. (Via Holler If Ya Hear Me)

Shakur's mother is also serving as a producer for the show.