Trump Wants The DOJ To Probe The Anonymous NYT Op-Ed 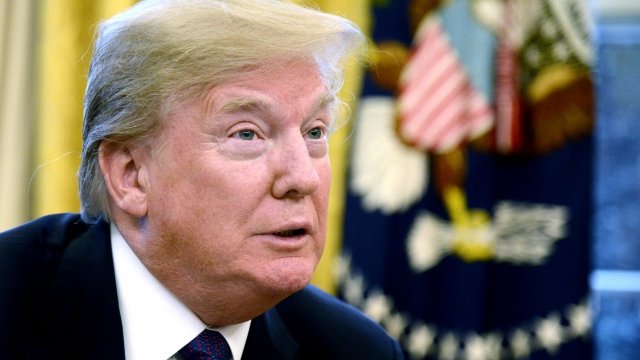 By Cristina Mutchler
September 7, 2018
The President referenced "national security" as a reason why AG Jeff Sessions should find out who wrote the anonymous article.
SHOW TRANSCRIPT

Speaking to reporters on Air Force One, the President said the Justice Department should work on finding out who the author is -- calling it a "national security" issue. He also said whoever's responsible for the article shouldn't be attending any "high level" White House meetings.

The piece in question was published earlier this week by an unnamed author, identified only as a senior administration official. It referred to a group within the White House that works to "thwart parts of (Trump's) agenda and his worst inclinations." The President immediately reacted, calling it a "gutless editorial."

It's important to note that although the President said it's a national security issue, the op-ed didn't reveal any classified information. CNN reports the DOJ typically only investigates those types of leaks. The Justice Department declined to comment on Trump's call for a probe, telling media outlets it "doesn't confirm or deny investigations."

When asked if he would attempt to take legal action against the Times, Trump didn't rule it out, saying, "Well, we're going to see. I'm looking at that right now."

The Times says it knows who the author of the report is, but isn't disclosing their identity in order to protect their job.