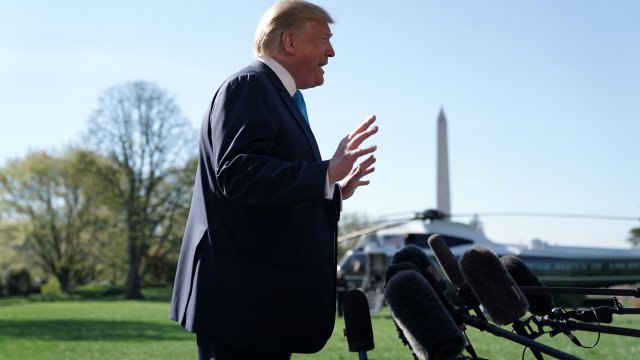 SMS
Trump Signs Orders Meant To Speed Up Certain Fossil Fuel Projects
By Alec Larson
By Alec Larson
April 10, 2019
The orders aim to streamline the production of gas and oil pipelines while making it harder for state-run agencies to intervene.
SHOW TRANSCRIPT

On Wednesday, President Donald Trump signed two executive orders that aim to streamline the approval process for gas and oil pipelines while making it harder for state-run agencies to intervene.

The first executive order changes implementation rules for energy infrastructure projects under the Clean Water Act, along with some other legislation, so that states will have a harder time impeding potential projects involving fossil fuels.

"My first order will speed up the process for improving vital infrastructure on our nation's border, such as oil pipelines, roads and railways. It will now take no more than 60 days. That's a vast improvement. And the president, not the bureaucracy, will have sole authority to make the final decision when we get caught up in problems," Trump said.

The second order will streamline the approval process for certain infrastructure projects, giving the president sole authority to approve or deny pipelines and other energy projects that cross international borders. Until now, the secretary of state has been involved with such decisions.

Environmental groups and state officials have already criticized the two orders. They argue, in part, that the president does not have the authority to take away the decision-making power granted to states under the Clean Water Act.