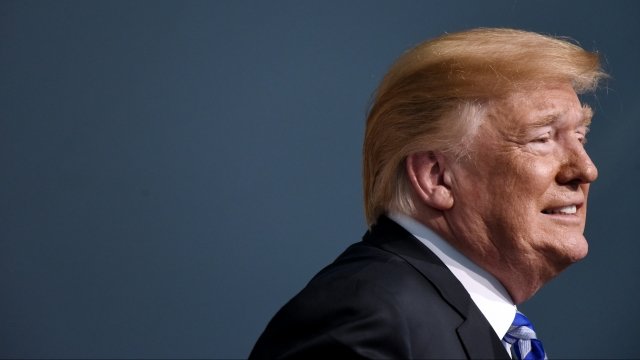 By James Packard
September 14, 2018
The president claimed his administration is making Social Security and Medicare stronger. The evidence points to the opposite.
SHOW TRANSCRIPT

While trying to defend his accomplishments against the allegations in Bob Woodward's new book, President Donald Trump claimed he's doing some things he's not.

In fact, last year's tax cuts, which the Trump administration championed, resulted in faster insolvency for both Medicare and Social Security.

The money feeding Medicare's core program will run out three years sooner than what was forecast last year. At least one year of that loss is due to the tax cuts.

And the forecast for insolvency on Social Security's widely-used retirement program shortened by a year, too. That was due, at least in part, to the tax cuts.

Social Security's smaller disability program is now expected to have funds for four more years than previously thought. That's driven by a decline in the number of people claiming benefits.

The White House says, because the economy is growing, Social Security and Medicare are getting stronger. But growth could ultimately drive up program costs. And unless money starts coming into the Medicare and Social Security funds faster, both programs are still on track to run out of money — sooner than previously expected.

In short, the Trump administration has not made Medicare and Social Security stronger, despite what the president says.