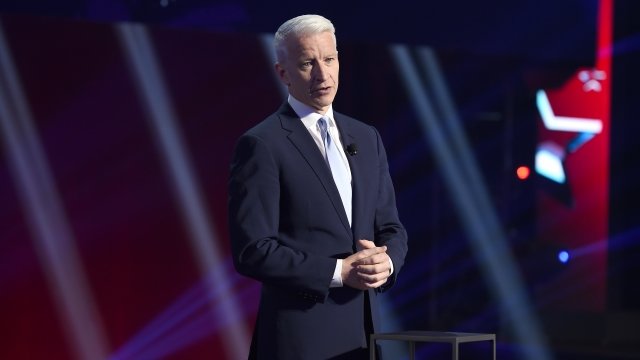 This image of Anderson Cooper has circulated far and wide in the last week or so. A lot of people sharing it seem to think it proves CNN is exaggerating floodwater depths in the wake of Hurricane Florence.

Those people include Donald Trump Jr., who tweeted the picture with this caption: "It's a shame that CNN's ratings are down 41%. What's worse is there's a simple solution that they refuse to accept. Stop lying to try to make @realDonaldTrump look bad."

There are so many things wrong with that tweet.

While Donald Trump Jr. didn't explicitly claim the image was from Florence, plenty of people who shared the picture did.

On to the next falsehood: This photo doesn't capture Anderson Cooper lying. He's literally standing in near-waist-deep water. The crew working with him is standing on higher ground to keep the camera dry. That doesn't make the floodwaters he's standing in any less deep.

Cooper spent some time debunking these claims on his show.

"As for those who think I was kneeling, or think I was faking the water level or making it look worse than it was or standing in some sort of a hole, this is an area where people had been trapped on the roofs of their homes by water," Cooper said.

Cooper went on to show video from that broadcast 10 years ago in which he's clearly walking around in the deep water and in which he acknowledges a nearby road, which was on higher ground. He said he didn't want to stand on it to avoid being in the way of rescuers who were driving on it.

"The idea that I am kneeling in water to make it look deep is, frankly, idiotic," Cooper said.

As for the claim about the ratings — that's way out of context. The 41 percent drop compared a week in early September to the same week last year. At that time in 2017, Hurricane Irma was slamming Puerto Rico and Florida. You can bet there was a spike in CNN's viewership that week. The comparison for the following week showed CNN's ratings bounced right back and actually increased double digits from a year before.

All of that aside, the floods resulting from Hurricane Florence are devastating. Entire portions of southeastern North Carolina are cut off. Interstates are completely covered in water. Dozens of people have died from the storm.