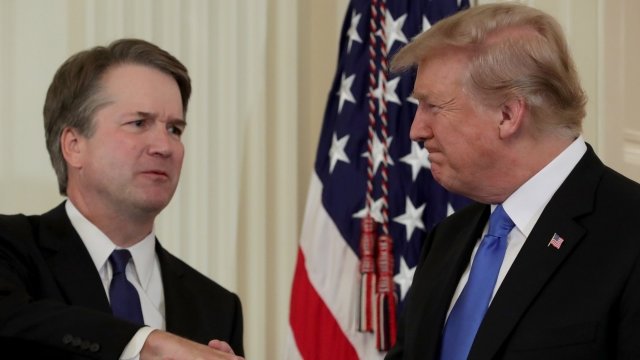 By Gabrielle Ware
October 1, 2018
President Trump said Monday that the FBI should "interview anybody that they want, within reason."
SHOW TRANSCRIPT

The White House said the FBI should "interview anybody that they want, within reason," as part of the probe into sexual misconduct allegations involving Judge Brett Kavanaugh.

A recent report by NBC News said the White House was limiting who the FBI could interview in the Kavanaugh probe. Democrats on the Senate Judiciary Committee, many of whom were concerned by NBC's report, have named more than two dozen people they'd like the FBI to speak to.

The White House denies it's limiting the investigation. On Monday, President Donald Trump said he wants it to be done "quickly," but that it should also be "comprehensive ... whatever that means, according to the senators and the Republicans and the Republican majority."

Trump still supports his Supreme Court nominee, who has been publicly accused of sexual misconduct by three women. The FBI has reportedly contacted two of them.

Trump also said he believes the probe will be helpful to Kavanaugh, but that if the FBI finds evidence against him, "I'm going to take that into consideration."