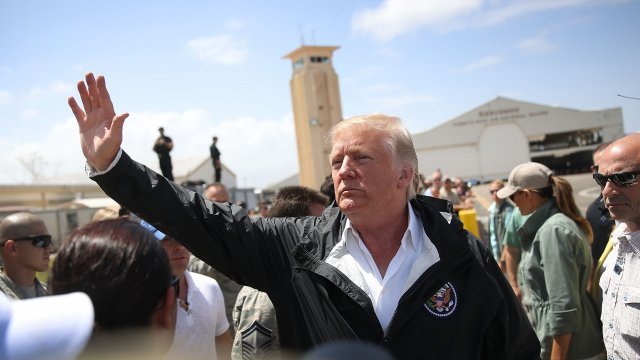 Last month, George Washington University released a report that put Puerto Rico's death toll at 2,975 – up from the Puerto Rican government's official count of 64. The government changed its count following the report.

The report was commissioned by Puerto Rican Gov. Ricardo Rosselló, who faced public pressure after the original death toll was widely disputed.

But Thursday morning, Trump tweeted, "3000 people did not die in the two hurricanes that hit Puerto Rico. When I left the Island, AFTER the storm had hit, they had anywhere from 6 to 18 deaths. As time went by it did not go up by much. Then, a long time later, they started to report really large numbers, like 3000..." He went on to accuse Democrats of inflating the numbers to make him look bad.

Trump's tweets aren't supported by facts. But if you're wondering how George Washington University calculated their numbers, researchers counted the number of people who died in the six months following Hurricane Maria due to excess mortality, or, deaths that would not have been expected had the storm not occurred. These could include deaths caused by a lack of clean water, electricity or poor access to health care because of the storm.

The government's initial estimates only accounted for deaths caused directly by the storm like, infrastructure collapse, flying debris and drownings.

The report also said most physicians were unaware of how to complete a proper death certificate, which lowered the death count.

In response to Trump, Rosselló said, "the hurricane took the lives of 2,975 people. That is a fact." He told CBS News, "neither the people of Puerto Rico nor the victims deserve their pain to be questioned."