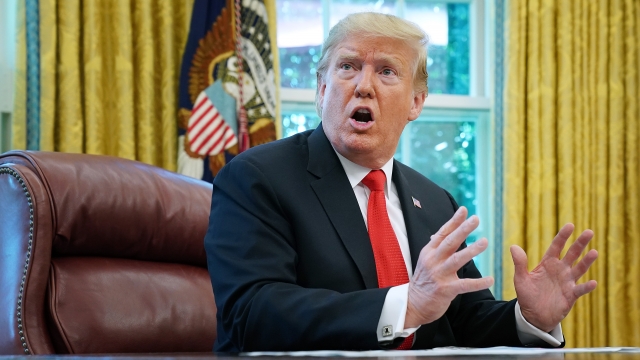 SMS
Trump Cancels Secret Meeting With Taliban At Camp David
By Alec Larson
By Alec Larson
September 8, 2019
President Trump blamed the cancellation of the peace talks on the Taliban's recent attack in Kabul that killed an American soldier.
SHOW TRANSCRIPT

President Donald Trump revealed that leaders of the Taliban and the Afghan government were scheduled to secretly meet with him in the U.S. on Sunday, before tweeting that he decided to cancel the meeting and end peace negotiations with the Taliban entirely.

President Trump blamed the cancellation on the Taliban's recent attack in Kabul that killed an American soldier. "If they cannot agree to a ceasefire during these very important peace talks, and would even kill 12 innocent people, then they probably don’t have the power to negotiate a meaningful agreement anyway."

Just a day earlier, Afghan President Ashraf Ghani had warned of this in a statement: "The government considers the Taliban's obstinacy to increase violence against Afghans as the main obstacle to the ongoing peace negotiations."

The cancellation comes just days after U.S. envoy Zalmay Khalilzad told TOLOnews that the U.S. and the Taliban had reached an agreement in principle, pending only on President Trump's final approval.

Despite President Trump's tweets, Secretary of State Mike Pompeo told CNN on Sunday that talks with the Taliban are expected to continue, with the hopes of eventually reaching a deal.