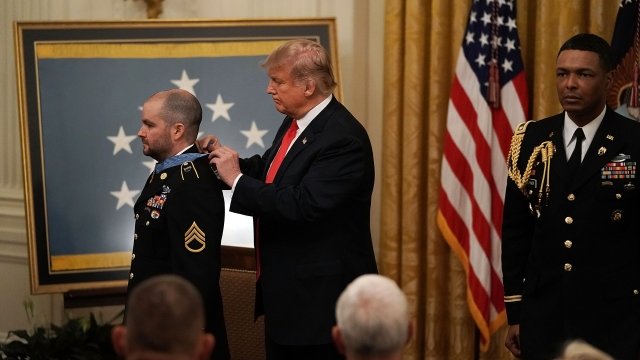 By Stephanie Liebergen
October 1, 2018
Former Staff Sgt. Ronald Shurer is credited with saving at least five American soldiers while on a mission in Afghanistan.
SHOW TRANSCRIPT

Shurer spent seven years in active duty with the U.S. Army, reaching the rank of staff sergeant with the Green Berets. On April 6, 2008, he and his unit were on a mission to capture a high-value target in Afghanistan when they were ambushed. He risked his life to treat and stabilize five injured soldiers, sometimes using his own body as a shield to protect them. He helped evacuate them before returning to the fight.

"For more than six hours, Ron bravely faced down the enemy. Not a single American died in that brutal battle, thanks in great measure to Ron's heroic actions," President Trump said during the ceremony.

Shurer lives in the Washington, D.C., area with his wife and two sons. He still serves the country working for the U.S. Secret Service.