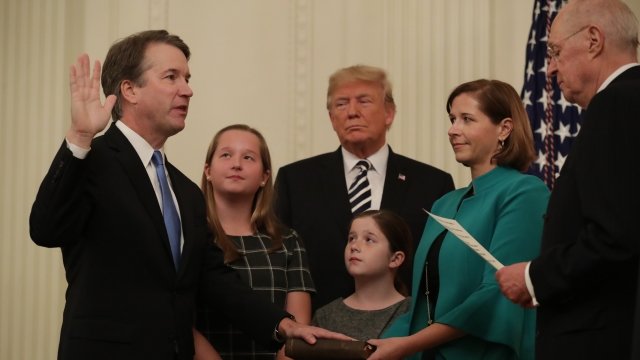 By Joshua Kranzberg
October 8, 2018
Brett Kavanaugh was confirmed to the Supreme Court on Saturday along mostly party lines.
SHOW TRANSCRIPT

At a ceremonial swearing in Monday night, President Trump apologized to Brett Kavanaugh for the way he was treated during his confirmation process to the Supreme Court.

"On behalf of our nation, I want to apologize to Brett and the entire Kavanaugh family for the terrible pain and suffering you have been forced to endure. ... What happened to the Kavanaugh family violates every notion of fairness, decency and due process," Trump said.

The Senate approved Kavanaugh on Saturday after a tense confirmation process, which included allegations he sexually assaulted a woman when he was a teenager. The newest justice, who forcefully denied the accusations, said he has moved on.

"The Senate confirmation process was contentious and emotional. That process is over. My focus now is to be the best justice I can be," Kavanaugh said, with his family by his side.

Kavanaugh was confirmed along mostly party lines. He was officially sworn in during a private ceremony by Chief Justice John Roberts. He replaces Anthony Kennedy, who stepped down at the end of July.