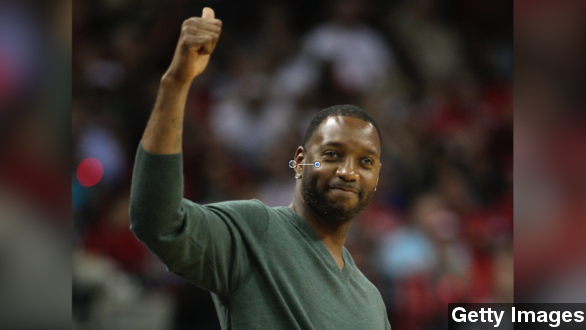 By Ben Lawson
July 17, 2014
Tracy McGrady has left the pitching mound for good after a baseball career that didn't come close to his tenure in the NBA.
SHOW TRANSCRIPT

Tracy McGrady has announced he is retiring from professional baseball after securing his first and only strikeout in the Atlantic League All-Star game, capping off what some would call an incredibly underwhelming career. (Getty Images)

In the retired NBA star's short, two-month career in the independent minor league, he pitched a total of 6.2 innings, allowing four hits and five runs.

McGrady had already informed his teammates this would be his last outing in baseball. "I told some of the guys that I am going to get a strikeout before I stop playing. I got it in the second inning. Thank you, Jesus." (Via KHOU)

In the baseball equivalent of dropping the mic, McGrady walked off the mound immediately following the strikeout and kept the last ball he threw for his trophy case. (Getty Images)

A Yahoo blogger speculates on why he thought getting into baseball was even a good idea in the first place. "T-MAC, like many athletes before him, wasn't ready to stop being competitive and hear the end of the applause from fans. ... Let's hope it satisfied him. We don't need T-Mac trying to play arena football."

He pitched a little more than an inning in his last game and only gave up one run against people who have been playing baseball their whole lives. SB Nation points out: "Thats an ugly ERA, of course, but hey, a lot of people would not be that good."

Bleacher Report writes that wasn't the only highlight of his career. He also became the first home run derby champion with no home runs thanks to his little league partner coming in clutch with six homers.

And that's a title no one will take from him.