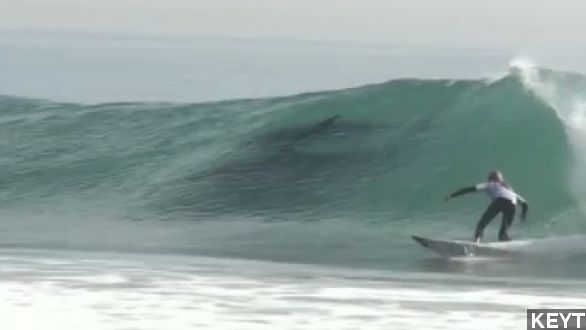 In this week's news, we've seen several animals jumping at the chance to surprise the unsuspecting. Here are Newsy's top three surprising animal stories of the week.

Our No. 3 spot goes to a bear who stumbled upon a California residence and shocked an elderly couple visiting from Scotland. Take a look at the footage caught on the house's security camera. (Via ABC / "Good Morning America")

​"Bob and Irene McKeown were visiting relatives in Pasadena, Calif., and didn't seem to notice there was a bear standing just a few feet away." (Via NBC / "Today")

Irene made it safely to the car, but Bob noticed the bear and ran back to the house.

"I felt something brush against my leg. I thought, 'I left the dog in the house, so it shouldn't be here.' Once I shut the door, I turned around and I shout: 'It's a bear! It's a bear!'" (Via KABC)

Luckily, the bear only slightly scratched Bob, who made it safely inside. Now the couple has quite the story to bring back overseas.

Our No. 2 spot for unexpected animal stories goes to this pod of about 12 dolphins who crashed a surfing competition and stole the show. (Via WPTV)

"That's a pod of dolphins surfing right along with the competitors. This tandem ride drew in a big applause from the crowd. What a beautiful sight. Very cool!" (Via  WOLO)

The dolphins made their cameo at the 2014 Rincon Classic surfing competition, and we give their ride a perfect 10.

And in our No. 1 spot, we have the cutest animal surprise of the week. Meet Sherlock the dog and his owner. (Via YouTube / SpangdahlemAirBase)

"That is Staff Sgt. Tyler Bigler returning home after being deployed. ... Man, his dog, Sherlock, missed him."

"They say he didn't leave his side all day. He was like, 'You're not going anywhere anymore.'" (Via  WTXF)

We told you it was cute! Sherlock hadn't seen Bigler — who was returning from deployment in Southeast Asia — in six months.

Thanks for watching; make sure to check Newsy.com next week for more top-three videos.