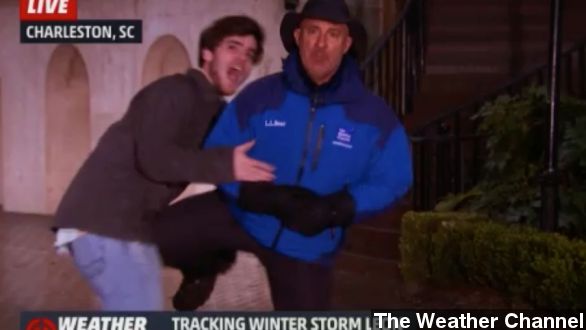 By Candice Aviles
January 31, 2014
This week's top three bizarre videos caught on camera include a woman attempting to jump on a train and TV reports gone wrong.
SHOW TRANSCRIPT

This week some flat-out bizarre acts were caught on camera, including a woman’s attempt to jump on a train and TV reports not going as planned. Take a look at this week’s top three caught-on-camera picks.

We start with unbelievable video of an Australian woman who tried jumping onto a moving train. She walks up, jumps, falls underneath the train for about a minute.

7News says she walked away with a few cuts and bruises but was otherwise OK. But she did learn a valuable lesson.

“It’s important that young people know they’re really not invincible, and it might seem funny at the time but it’s … not. At the very least you can end up embarrassed, and at the most you can end up dead.”

From a brush with death to a death threat caught on camera — but this threat is from a congressman to a NY1 reporter.

Rep. Michael Grimm did an interview after President Obama’s State of the Union address. It was all smooth sailing until the reporter asked Grimm about allegations about his campaign finances. (Via CBS)

The interview ended, but the camera was still rolling. That’s when things got ugly.

Grimm later apologized to the reporter, but let this be a lesson to anyone interviewing that the camera may always be on. (Via NY1)

Perhaps the most epic act caught on camera this week was a weatherman kneeing a college student in the groin during a live report.

The Weather Channel's Jim Cantore didn’t even flinch after a College of Charleston student ran at him, screaming during a live shot. When the kid gets too close, Cantore casually knees him in the groin.

As you’d expect, the video went viral, and eventually WCSC tracked down the bold student. (Via YouTube)

REPORTER: “If you had the chance to do it all over again, would you do it?”

Fifteen minutes of fame ... or pain. Either way, it sure made the list for this week’s bizarre acts caught on camera. Join us next week for more.