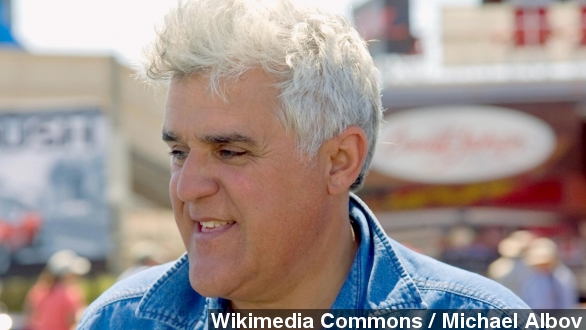 Jay Leno will take the "Tonight Show" stage for the last time Thursday night — again. And his departure definitely feels like déjà vu.

Leno will hand the show over to Jimmy Fallon, NBC's newest pick for the host position, and the entire week was dedicated to sending Leno off. (Via NBC / "The Tonight Show with Jay Leno")

But all the tearful speeches from favorite guests, "best moments" roundups and torch-passing seemed eerily similar to the last time NBC asked Leno to step aside for another host nearly five years ago.

Back in 2009, the network made headlines by choosing Conan O'Brien to take Leno's place. But Conan's ratings slipped, NBC affiliates complained, and Leno was brought back just seven months later. (Via Yahoo)

And as Leno leaves the stage for a second time, TV critics are describing his second sendoff as, well, awkward.

As a writer for The Washington Post puts it, "Politely sending Leno on his way is like trying to come up with another wedding toast for someone who keeps getting married, or a grocery-store sheet cake for the departing employee who keeps getting rehired as a contractor, or the meaningful eulogy for someone who burst out of the coffin once and might darn well do it again."

And the two separate farewells do bear a striking resemblance. The show has even decided to recycle the celebrants from the last time around.

Billy Crystal, who was on Leno's very first show in 1992, appeared during his "last" show in 2009 and is scheduled to show up again Thursday. (Via CBS / "Late Show With David Letterman")

And Leno's reactions to leaving again are pretty similar, too.

Sure, Leno put on his best face and said some nice things about O'Brien when he took over, and he did the same for Fallon as he prepares to do the same. (Via Variety)

But he's let a few lighthearted yet passive-aggressive jokes slip out about his departure this time around.

"I read today where NBC said they would like me to be just like Bob Hope. Dead." ​(Via NBC / "The Tonight Show with Jay Leno")

As for what caused Leno's departure the second time around, New York Daily News notes it's not because of his ratings. "The Tonight Show" has slid a little in recent years, but almost all broadcast network shows have.

And a writer for USA Today feels Leno should just get a better sendoff. "Leno has been a good, loyal and very successful soldier for NBC, and he deserved a better farewell than the one he's been given."

As for where Leno's headed next, he's refused to say. But NBC said it would love to keep him around for specials and other projects.