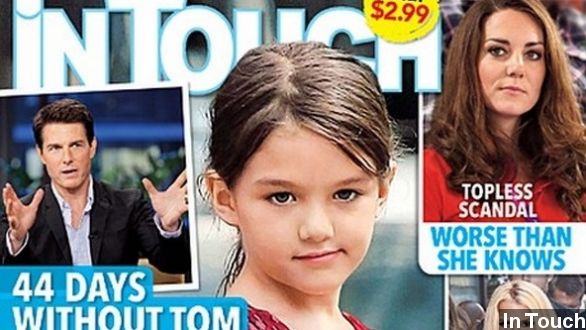 By Candice Aviles
December 21, 2013
The terms of the settlement are confidential but Bauer did release an apology.
SHOW TRANSCRIPT

Tom Cruise and Bauer Publishing settled their $50 million defamation lawsuit about abandoning his daughter, Suri, out of court on Friday. The terms of the settlement are confidential but Bauer did release an apology.

“Bauer Publishing along with In Touch and Life & Style magazine say they never intended to say Cruise had abandoned his daughter. They say they regret if anyone inferred that from anything the published.” (Via CNN)

In case you don’t remember, Cruise and his attorneys filed the lawsuit Oct. 24, 2012 after In Touch published stories about Cruise abandoning his daughter Suri following his divorce of Katie Holmes.

The litigation lasted for over a year and The Hollywood Reporter reports it was quite the showdown.

Among other strategies, Team Cruise challenged Bauer Publishing to produce sources for their stories, and attempted to probe an alleged connection between Bauer and neo-Nazis. In turn, Bauer’s attorney’s tried to dig up Suri’s mental health records, how often Cruise contacted Suri after the divorce and more.

The back-and-forth also revealed Cruise at one point hadn’t seen his daughter for 110 days because he was overseas filming and that Katie Holmes left him to protect Suri from Scientology. (Via New York Daily News)

The settlement said each side will pay their own legal fees and the case was dismissed with prejudice, which means Cruise can’t refile in the future. (Via E! Online)