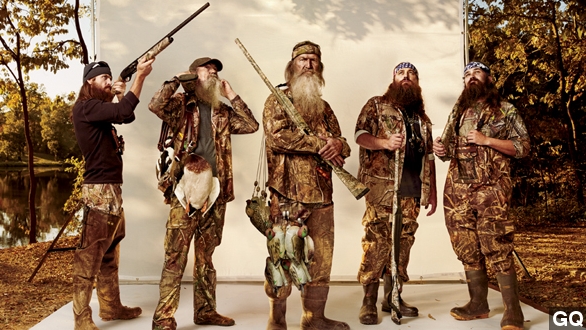 By Elizabeth Hagedorn
December 23, 2013
People on both sides of the debate surrounding Phil Robertson's comments have urged a closer look at the faith-based arguments made by Christians.
SHOW TRANSCRIPT

The backlash over Phil Robertson’s anti-gay remarks was swift, to say the least.

MIKA BRZEZINSKI: "What he said was disgusting." (Via MSNBC)

PIERS MORGAN: "I think he should be fired. I think its absolutely repulsive what he said." (Via CNN)

As was the backlash over A&E’s decision to bench its Duck Dynasty star after the next season airs. (Via Change.org)

BOBBY JINDAL: “The left keeps saying they're for tolerance except for people that disagree with them.” (Via MSNBC)

And when Cracker Barrel announced it would be pulling some of its Duck Dynasty merchandise from the shelves, it was met with so much outrage, the chain store quickly reversed its decision.

​But amid all the indignation are we missing the bigger picture? That from the point of view of conservative Christians, mainstream gay rights advocacy often seems less about equality and more about silencing a widespread religious perspective.

Robertson's crass language aside, it's worth remembering his views aren't exactly fringe. Like many devout Christians, he believes homosexuality is a sin. (Via A&E)

ROBERT JEFFRESS: “Sin is sin. The Bible labels homosexuality, lying, adultery, these are all sins.” (Via CNN)

SARAH PALIN: "He was reciting a part of the gospel. The liberal left must feel that the gospel then is insulting and offensive." (Via Fox News)

Even the Pope — the man Time named as its Person of the Year — shares in his views, at least somewhat. Francis once called gay marriage the work of the devil. (Via Wikimedia Commons / Casa Rosada)

Yet while Robertson's remarks were predictable and shared by many Christians, A&E responded by yanking one of conservative America's favorite TV personalities from the air.

That, Larry Alex Taunton at The Atlantic says, sends the wrong message: "The implication of that message is that 45 percent of Americans should, in principle, be prepared either to sacrifice their jobs or recant their beliefs."

As a gay rights advocate writes in an article for Time, maybe gay activists should change course, and that instant outrage and calls for boycotts might be doing more harm than good.

“Why is our go-to political strategy for beating our opponents to silence them? ...  I see this as an opportunity to further the discussion … and to rise above the endless sea of tweet-hate to help move our LGBT conversations to where they need to go." (Via Time)