This Is How Fortified Cleveland Is For The RNC 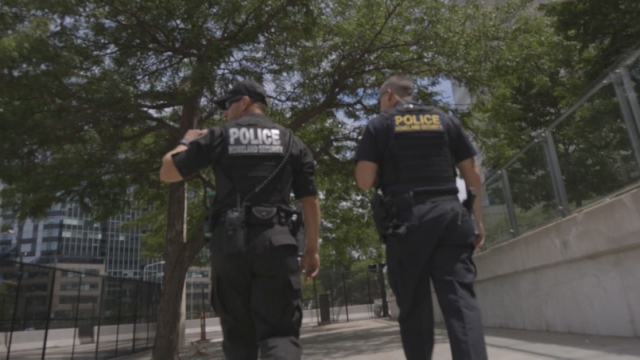 SMS
This Is How Fortified Cleveland Is For The RNC

By Melissa Prax
July 17, 2016
As thousands of people flood into Cleveland, both the city and the federal government will be focusing on security.
SHOW TRANSCRIPT

"We've been training and starting to work on the security about a year ago. So we've been preparing for over a year for this week," Cleveland City Councilman Brian Kazy said.

Right now, there are dozens of Secret Service agents here in Cleveland, and they've set up this barricade, though the city itself has a large role to play, too.

Alongside Cleveland's officers, there will be about 5,000 police working the event, coming from all over the country.

"I know that Austin just provided us with additional horses. The municipalities that are coming in are not only providing bodies, but additional cars, etc.," Kazy said.

But getting all of that law enforcement posed some challenges.

Some departments pulled out at the end of May because Cleveland's insurance wasn't going to pay for police injuries. But that's changed.

"The city paid $9.2 million for an additional insurance policy that will cover law enforcement along with if anything else happens — to a business, to a building, to an individual," Kazy said.

The city of Cleveland is hoping to get some of that money back through all of the convention-goers boosting the local economy.

"The federal government did come in and give the city a $50 million grant in order to better prepare the city, law enforcement and otherwise as well as for security measures," Kazy said.

"Not only are we using previous conventions as an example, but we're also using the tragedies that have happened most recently in the past week as examples of what could possibly happen," Kazy said.