The Weird And Expensive World Of Super Bowl Ads 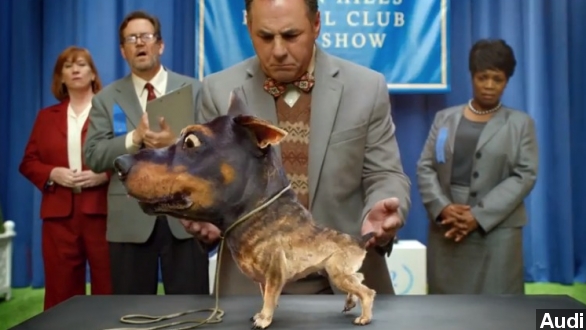 SMS
The Weird And Expensive World Of Super Bowl Ads

By Christian Bryant
February 1, 2014
Super Bowl ads have changed over time with the help of the Internet, but some still question their effectiveness.
SHOW TRANSCRIPT

There are a few things we can expect with Super Bowl XLVIII: one team will raise the Lombardi Trophy in victory — duh.

But we can also expect ads that'll make us laugh, make us cry — OMG, THERE'S A PUPPY AND SOME HORSES — and even some that'll make us cringe. Still not sure what to think about this one from last year. (Via Anheuser-Busch, GoDaddy)

In an effort to gain traction before the big games, companies have let ads run wild on the Internet ahead of time. This year's no different with Audi's "Doberhuahua" and CarMax's "Slow Clap." Yeah, that was a bear and park ranger... clapping... together.

But how did we get here? How did Super Bowl ads get so weird?

I'm not complaining, but the ads we'll see tomorrow, and the one's we've seen in recent years, are a far cry from this Master Lock ad that aired in '75.

"The Master Lock model -15 sustained considerable damage, but did not open."

Here's one answer: because the Internet.

A writer for NBC says, "Advertisers are currying the Internet's favor, using disturbing imagery and themes designed to bait the Internet's appetite for the fringe ... If weird is hot, it's because that's what 'the kids' online are into."

Of course there are plenty of weird things floating around in the World Wide Web, so it makes sense that that same kind of weirdness is harnessed by advertisers to leave lasting impressions. (Via YouTube / Don't Hug Me .I'm Scared)

A writer for The Week says Super Bowl ads used to be designed for a quick and immediate punch to stand out.

Now, "There's a new strategy ... which forgoes the scrum of Super Bowl Sunday in favor of building early buzz on the internet. ... the Super Bowl is merely treated as the launch pad for an advertisement that can live on YouTube before, during, and after the game."

So, we might like these ads or laugh or react however the advertiser intended, but are they effective?

One research company says, well, no. In a 2013 Super Bowl study, research firm Communicus found that only one out of every five ads actually compelled consumers to actually buy products.

Communicus interviewed 1,000 people before and after Super Bowl XLVII and asked them about products they planned to buy. As Business Insider writes, "An ad was deemed effective if it compelled them to add that product to their list of considerations. But likeability and effectiveness did not always correlate."

While that exposure can mean diddly-squat to the more established brands, the price and the exposure can mean everything to smaller companies. A writer for The Atlantic cites a Google study that found Super Bowl ads for lesser-known companies and products created an uptick in search behavior.

One company that comes to mind is GoldieBox. With "barely 15 employees," GoldieBlox will be the first small business to have a commercial air during Sunday's Super Bowl after winning an ad contest with Intuit. (Via CNN)

For all the ads — weird, overly-expensive and otherwise — people will be talking about next week, tune in to Super Bowl XLVIII Sunday on FOX.