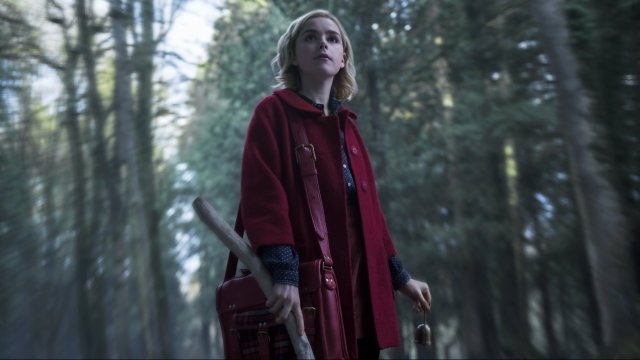 SMS
The Satanic Temple Sues Netflix For $150 Million
By Ahmed Jawadi
By Ahmed Jawadi
November 9, 2018
The Temple claims a Baphomet statue featured on the show infringes on its copyright and harms its reputation.
SHOW TRANSCRIPT

The Satanic Temple is suing Netflix and Warner Bros. for allegedly giving it a bad name.

The Temple filed a lawsuit Thursday with the U.S. District Court in Manhattan over Netflix's new show, "Chilling Adventures of Sabrina." The nontheistic group says the show infringed on its copyright of its statue, "Baphomet with Chilrdren." They're also suing over trademark violation and injury to the business' reputation, and are requesting an injunction to stop the distribution of the series with the image of the statue.

The Temple claims a Baphomet statue featured on the show was copied directly from a bronze statue the Temple designed roughly five years ago. You might remember it as the statue brought to the Arkansas State Capitol in August in protest of a Ten Commandments monument that was installed earlier this year.

But the lawsuit is just as much about copyright as it is about reputation. The Temple argues the show portrays it in a negative and false light. It says Netflix and Warner Bros. "misappropriated" the statue by associating it with evil and activities counter to what the Temple believes.

The group is seeking at least $50 million in damages for each charge. As of Friday afternoon, Netflix and Warner Bros. have yet to comment.