When Did Presidential Turkey Pardons Start? 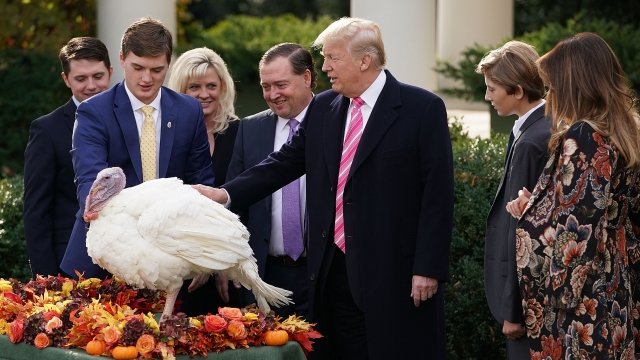 By James Packard
November 15, 2018
It's time for another presidential turkey pardon, and that means it's also a good time to brush up on the history of the tradition.
SHOW TRANSCRIPT

It's that time of year again — the presidential turkey pardon. The memes, the lame jokes, the gobbling — it's all there.

Yes, the tradition seems pretty silly. But it actually has some deep historical roots.

We know Ben Franklin was a fan of turkeys. He called the turkey "respectable" and a "Bird of Courage." He even said it "would not hesitate to attack a Grenadier of the British Guards who should presume to invade his Farm Yard with a red Coat on."

And there's a story that Abraham Lincoln's son convinced him to spare a turkey.

President Truman was the first to have a turkey-receiving ceremony, and Eisenhower continued the tradition. But these guys were destined for the dinner table.

President Kennedy also spared a turkey, and the move was the first to be jokingly referred to by the press as a pardon.

But we didn't get our first official pardon until George H.W. Bush.

Every president since then has upheld the tradition. So there you have it: how we got to the modern presidential pardon.