The Best World Cup Ever... Or The Worst? 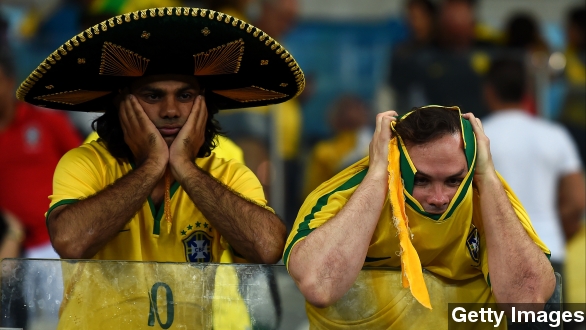 SMS
The Best World Cup Ever... Or The Worst?

By Sebastian Martinez
July 13, 2014
Many fans and pundits alike are calling this World Cup in Brazil the best ever. Brazilians would tend to disagree...
SHOW TRANSCRIPT

With the World Cup wrapping up at Rio's legendary Maracaña stadium Sunday afternoon, many are already asking if this has been the best World Cup ever. (Via Getty Images)

It's the ubiquitous question, gracing the headlines of publications from Forbes, to The Guardian and The Atlantic, as pundits try to find Brazil 2014 a place in the World Cup pantheon.

Those outlets point to the exciting matches, underdog stories and huge goal tally — a whopping 170 goals total — as some of the reasons the tournament could be considered the greatest of all time. (Via Getty Images)

There was certainly plenty of drama. Who could forget Luis Suarez biting a player, or Brazil's star player Neymar getting injured before the semifinal against Germany?

And American fans took to the game like never before, with the U.S.'s thrilling 2-2 draw against Portugal attracting a record-smashing 25 million viewers. (Via The New York Times)

A recent survey by the BBC showed just how big a hit Brazil has been. Almost 40 percent of responders named Brazil's tournament as the best ever — that's more than the next four top choices combined.

But there is one group of fans for whom this will go down as the worst ever World Cup: the hosts themselves.

Brazil suffered its biggest ever World Cup defeat at the hands of Germany: a humiliating 7-1 thrashing that, for some of the proudest fans in soccer, has eclipsed 1950's home defeat in the final against Uruguay. (Via Getty Images)

The Brazilian press were quick to condemn everyone involved, with newspapers telling Brazil manager Felipe Sclorai to "go to hell!" and calling the tournament an $11 billion waste. (Via Youtube / roosvelt1984)

In the lead-up to the World Cup, and last year's Confederation Cup, there were widespread protests against what many Brazilians saw as wasteful spending. (Via VICE)

Bloomberg reports corruption is largely to blame for stadium construction and other preparation going more than $1 billion over-budget.

​And one superlative that's pretty indisputable, as CNBC points out: Brazil 2014 is the most expensive World Cup in history, with costs totaling around $11 billion.

The anti-World Cup sentiment projected in those protests was largely cooled by the excitement of the games themselves. Now that excitement's gone, some say there could be political consequences. (Via Youtube / Ben Tavener)

As Vox reports, Brazil's presidential elections are coming up in October. And while incumbent Dilma Rousseff is still the front-runner, unhappy voters tend to vote against incumbents.

And Foreign Policy reports Brazil's losses have possibly sparked something bigger, writing, "Now the beautiful game is at the center of an agonized national rethink, a mass, middle-class movement against outdated infrastructure and failing services."

One final insult for Brazil: watching their biggest rivals Argentina play in their most revered stadium.