The Anti-Beyoncé Organizers Skipped Their Own Rally 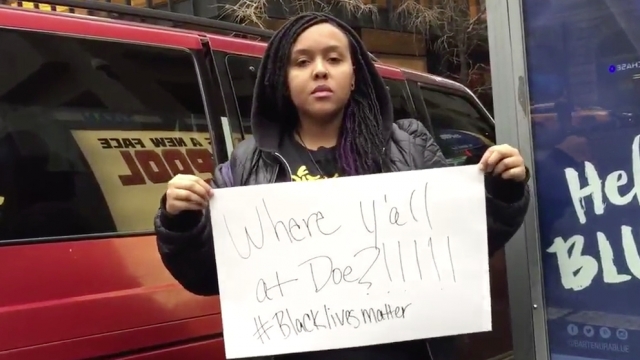 SMS
The Anti-Beyoncé Organizers Skipped Their Own Rally
By Jamal Andress
By Jamal Andress
February 16, 2016
The Beyhive was in full effect Tuesday during what was meant to be an anti-Beyoncé rally. But there was one hitch: The rally organizers didn't show.
SHOW TRANSCRIPT

One Beyoncé supporter said, "It's kind of basic and stupid to be out here protesting Beyoncé, but it's very important that we showed up today to not only stand with Beyoncé but to continue to say that black lives matter."

Remember that anti-Beyoncé rally? Well, the organizers of the rally didn't.

"We don't know why they're not here. We don't really care. That's not our concern. Our concern is trying to be positive with the negative response that they had and they are not here" Beyoncé supporter Mary Pryor says.

The Beyoncé supporters did show up (and plenty of media.)

"Whether or not you like Beyoncé is not the issue. You can't really dispute the message she's trying to convey, and that is against police brutality and just respect for other human beings," Spencer Jones said.

This video includes clips from Columbia Records / Beyoncé and images from Getty Images.