The $3 Million Crowdfunding Effort To Unseat Sen. Collins In 2020 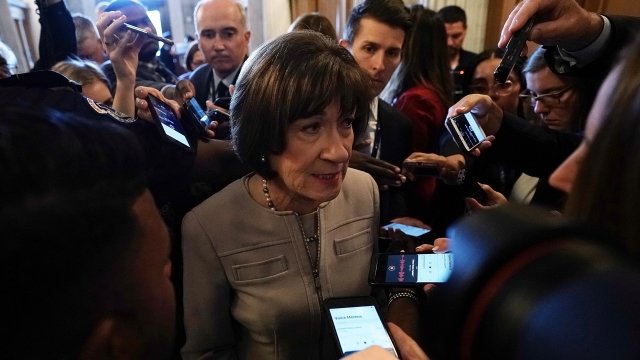 SMS
The $3 Million Crowdfunding Effort To Unseat Sen. Collins In 2020

By Andrea Gonzales
October 6, 2018
A spokeswoman for Collins told The Washington Post: "Threats or other attempts to bully her will not play a factor in her decision making whatsoever."
SHOW TRANSCRIPT

A crowdfunding page titled "Either Sen. Collins votes no on Kavanaugh or we fund her future opponent" has raised over $3 million for the 2020 race. The page was created before the moderate Republican from Maine announced her decision on the Senate floor Friday.

For comparison on that dollar amount, Collins' campaign spent $5.5 million when she ran in 2014 and won by 68 percent.

Collins has called the crowdfunding campaign "bribery." And because it was created to directly influence her vote, the legality may be dicey.

Before Collins announced her decision on Kavanaugh, a spokesperson told The Washington Post: "Anybody who thinks these tactics would work on Senator Collins obviously doesn't know her. ... Threats or other attempts to bully her will not play a factor in her decision making whatsoever."

"The facts presented do not mean that President — that Professor Ford was not sexually assaulted that night or at some other time. But they do lead me to conclude that the allegations failed to me the more-likely-than-not standard. Therefore I do not believe that these charges can fairly prevent Judge Kavanaugh from serving on the court," Sen. Susan Collins said on the Senate floor.

We're already starting to get an idea of who might challenge Collins in 2020.

A physician from Maine announced in July she's running against Collins as a Democrat. And Susan Rice, a former national security adviser to President Obama, hinted on Twitter Friday she wanted to run against Collins in 2020. She quickly walked back her tweet, saying she's "not making any announcements" but "Maine and America deserve better."